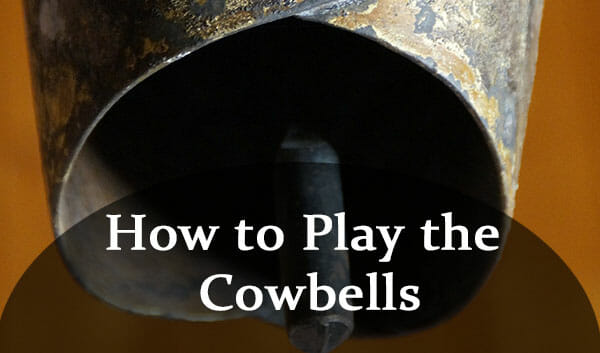 Having its origins older than 10,000 years ago, the Cowbell, a belt with a bell to be worn around the neck, was how the herders kept track of their free-roaming livestock. The name suggests it to be used just for cattle but it was only extensively used for it and not exclusively. All animals were allowed to have a “thunk“ or a “ding” based on their personalities.

It was in the early decades of 1900 when cowbell was first heard in the American hillbilly music as an idiophone percussion instrument. After that, there was no going back for this bell. It has remained a matter of significant importance till date for various types of music.

Although, the April 2000 episode of Saturday Night Live with Will Ferrell’s “More Cowbell” had made it the slogan of everyone from the rock industry.

Music Genres That Still Have Cowbell

Cowbells have been widely connected to salsa, funk and Latin American music composition. Because of its obviously recognizable beats and its loud rhythmic sound, the salsa dancers can move around the beats easily. The settings of samba dance form which is almost similar to that of salsa goes along well with the Agogo bell. It is a close relative of the cowbell but with multiple bells at times and a comparatively higher pitch.

If you really are that dedicated to search the web for guidelines on How to play a Cowbell, then you need to know about the different number of cowbells with subtle but crucial differences in sound.

To begin with, the Charanga Bell is a high-pitched accent bell due to its small size in the cowbell family. The Cha-Cha Bell belongs to the same category. The Timbale or Mambo Bell, which is a medium sized bell works best in a salsa setting.

The Bongo Bell is when you want to opt for the biggest one. It’s low-pitched sound and not so complex patterns complements well in rock songs. The Guataca was replaced by Cowbells in Latin music. The structure of Guataca did not resemble to that of a bell but did give out a bell-like tone.

Right Places To Buy One

Your ultimate guide of buying the best cowbells must include the top manufacturers of this beauty based on the features you want. Yes, there are some specifications in cowbells that increase its sound quality immensely.

Latin Percussion being one of the oldest has a number of different series in the type of cowbells they sell like the LP Salsa series or the Ridge Rider series, each having its own perks.

Other manufacturers like Meinl and Pearl started small scale at first but later expanded greatly in this business. Operations like JCR Percussion are less renowned but the fact that they sell handmade cowbells even today says everything about their authenticity.

How To Hold A Cowbell

Unlike other instruments, holding this one correctly contributes immensely to the sound it reverberates. For optimum sound effect, you have to first make a claw out of your non-dominant hand. (Yes, it’s time to make good use of it!) Now, insert the narrow-closed end of the cowbell in it in a way that your fingers are extending towards the open end.

Supporting the cowbell from the back is how musicians make variations in it’s sounds. The pointer finger and middle finger are mostly used to either support the cowbell and mute the ding or lifting them up to produce a louder and ringing sound.

Making Variations In The Cowbell Sounds

There are majorly three parts on a cowbell which are used for percussion. Every one of them is doubtlessly in sight.

The open end being the first one, where you have to use the shoulder of the drumstick to produce sound. The middle part of the bell which is the most controllable part where the tip of the drumstick makes sound. Lastly, towards the narrow end, once you find the perfect ding, it becomes the spot of alterations.

You can use different combinations of the muted or unmuted sounds that these three parts can make to blend it with your song. Making intricate patterns with a mixture of two or three of these beats is usually what makes a good salsa song.

See? Isn’t it a hands down simple yet melodious instrument to learn? One can even learn it merely by reading the blog. Go ahead, start your practice now that you know enough about it.