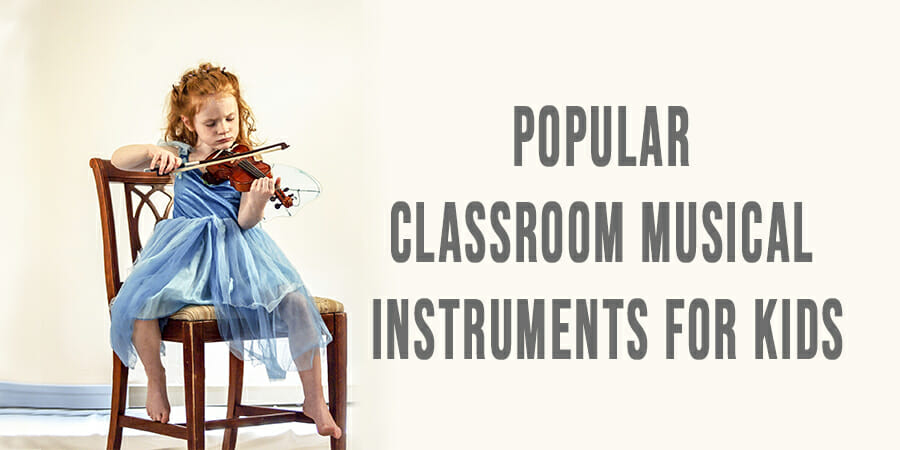 Music not only boosts the cognitive development of the kids but also helps them positively express themselves. Most schools have added music classes to their academic curriculum to promote the overall growth of children.

Here are 10 popular instruments for your little musicians to play in school. 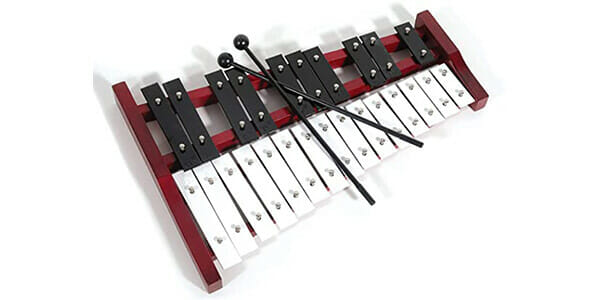 The xylophone is a percussion instrument. It belongs to the family of idiophones as they produce sound by vibration in the whole instrument when it is stuck anywhere. It consists of wooden bars of different lengths and is similar to a glockenspiel but is large in size.

The marimba is not to be confused with the xylophone unless you’re in Latin America where they’re often interchanged.

The bars of a xylophone are arranged from low pitch to high pitch side by side just like the keys of a piano and each bar is usually pentatonic or heptatonic.

The player strikes the xylophone’s bars with two mallets. Kids can play it with their fingers or use lightweight mallets made of rosewood or ebony. Mallets wrapped in the yarn are another less hazardous option. Hard rubber mallets are a big no.

Professional xylophones have 4 octaves, but there are also colorful xylophones with 1½ or 2 octaves for elementary kids. Kids can begin with the playschool version of xylophone and move towards the larger ones when they’re old enough.

Musically speaking, the xylophone doesn’t have resonance and therefore, has a precise sound. It is used as a solo instrument or as an addition to other instruments. 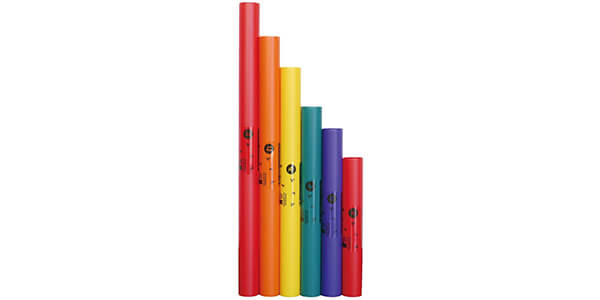 Boomwhackers were invented in 1994 and since then, schools found them as an inexpensive alternative to xylophones. They’re used in performances to bring some color to the stage.

Boomwhackers are color-coded hollow tubes that serve as percussion instruments. They’re made of plastic and are light in weight. The pitch varies with the length of the tubes. The shortest tube has the highest pitch.

Activity Tip: Place boomwhackers of various lengths before the kids and let them guess which one has the lowest or the highest pitch based on their length.

The tubes are struck with each other or against any surface, even floor, to make music. They’re also grouped together like the keys of a xylophone and are stuck with a mallet. 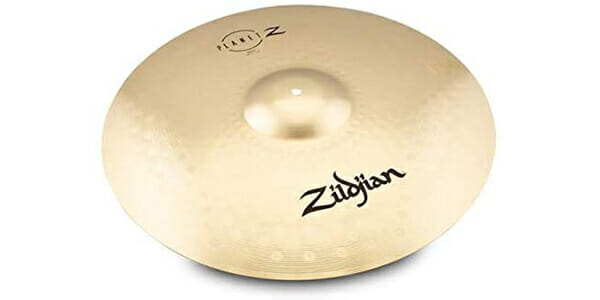 These versatile instruments have been there from the prehistoric times. They’re found in several illustrations from ancient Greece and Rome.

Cymbals are used as standalone musical instruments or are added as jingles to other instruments. They are a common component of percussion ensembles.

These convex percussion discs are usually made with metals like copper or brass. There’s a hole in the middle through which a strap passes. The player, called the cymbalist, holds a cymbal in each hand through the strap.

The cymbals are slid across each other and their edges are struck together. They can be played to produce tones of both soft and loud ranges. The loud tone gives a vibrant touch to the orchestra.

They can be tiny like the finger cymbals or large like the suspended cymbals. Suspended models can be a bit harder for younger kids. But older kids can achieve the Latin music effect on suspended cymbals with practice.

Cymbal notation is written on a single line and is easy for kids to read. 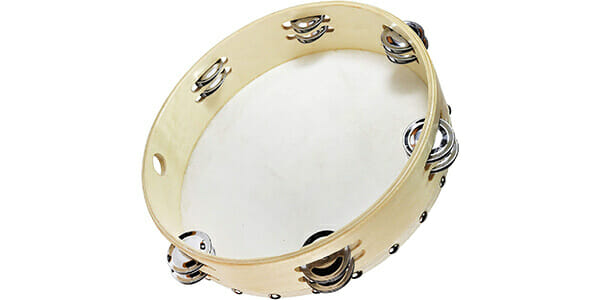 The tambourine is a percussion instrument with tiny cymbals, called zills fitted into its frame. It comes in many shapes, but circular ones are the most common. If you’ve loved cymbals, you’d also love the tambourine.

‘Tambour’ is a French word for drum. But the tambourine functions both as a drum and a rattle.

Back in the day, dancers used cymbals and tambourines in religious performances. Those tambourines consisted of a wooden frame with brass cymbals.

Modern tambourines are made of different types of materials. They’re heard in rock, pop, and several other music styles, and are an entertaining instrument for children.

Tambourines are usually hand-held and played by striking the head or shaking it to produce jingles. In fact, there are countless ways to play them. They can also be mounted as a part of the drum kit. With practice, special effects like the tambourine roll and thumb roll can be achieved. The timbre of the tambourine is bright and complex.

A simpler tambourine doesn’t have the drumhead and is essentially a cymbal frame. 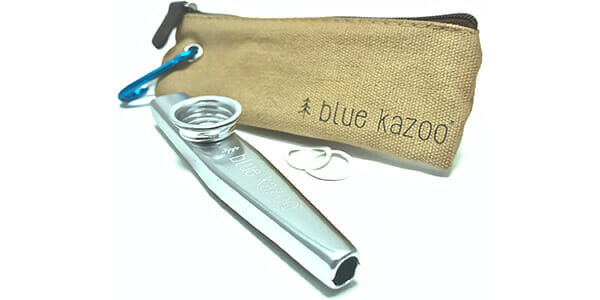 Kazoo is often described as one of the most interesting instruments in America. It was first made in the U.S.A in 1852. It belongs to the family of membranophones.

A membranophone is a musical instrument that produces sound by the vibration of a stretched membrane.

The kazoo is an open tube with a hole on the side. The hole is covered by a parchment membrane and causes the signature buzzing sound of the kazoo. By the looks of it, some think it is a toy.

One end of the tube is flattened and the other end is hollow. The player hums (not blows) or sings into the flattened side and the air pressure causes vibration in the parchment membrane. The volume varies with the intensity of humming and the syllables used. This helps kids practice speech and music at the same time.

The quality of the sound of a kazoo depends on the material it is made of. Kazoos are available in plastic, metal, and wood.

The kazoo is a beginner-friendly instrument as playing it requires no complex techniques.

Fun Fact: January 28 is recognized as National Kazoo Day in the United States. 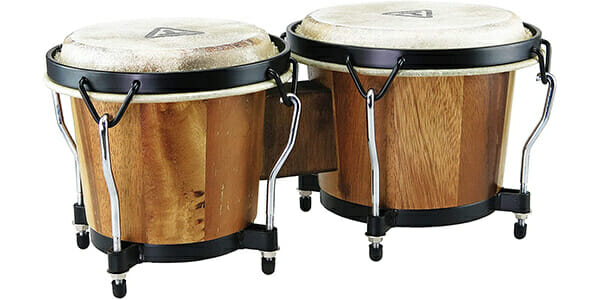 Bongo drums, shortly known as bongos, are percussion instruments of Afro-Cuban origin. One can find them almost everywhere in Cuba. They are also the most common hand drums across the world.

Bongos are a pair of drums attached to each other. They are around 8 inches tall, but kids’ models are about 5 to 6 inches in height. The bottom of the drums is open. The drums are constructed with several small parts. So, it is advised to introduce this instrument to kids above 5 years of age.

When playing the drums, the player positions them between his legs (behind the knees, to be precise). The drumheads are struck with sticks or with different parts of the hand, but not the knuckles. Bongo players are known as bongoseros.

The skin of the drumhead is prone to cracks when not in use for a long time. To prevent this, it must be protected with drum oils. 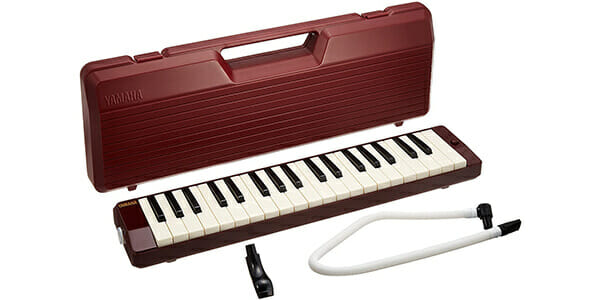 The melodica is a perfect instrument for kids of any age. Even adults can have fun playing it.

It is a free-reed instrument with a musical keyboard. The keyboard is about 2 to 3 octaves long. Air is blown to flow through the framed reed and produces sound. So, it is also called the blow-organ or key-flute.

Instruments similar to the melodica can be traced back to the 19th century in Italy. However, German manufacturer Hohner is cited as the inventor of the modern melodica.

The melodica is made of plastic or wood. Wooden melodicas produce a warmer and deeper tone compared to the plastic ones. But plastic melodicas in cheerful colors look attractive for kids.

This instrument can be played with two hands by fitting an air tube to its mouthpiece. Sometimes, a foot pump becomes handy to blow air into it.

Fun Fact: A recording technician who hasn’t known about the melodica called it a hooter and American rock band, the Hooters adopted it as their name. 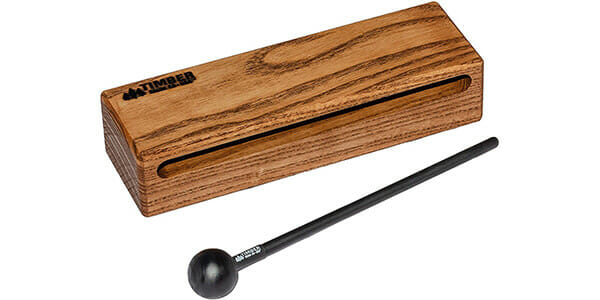 A wood block, also written as woodblock, is a simple percussion instrument made from a single piece of wood. It can also be described as a slit drum.

Slit drums are not technically drums and they belong to the family of idiophones.

Wood blocks are mostly rectangular in shape and have a large slit. This structure is similar to that of a temple block, a popular instrument of China and Japan in the olden days. Cylindrical wood blocks are the next popular choice for kids.

The blocks are struck with a beater or a mallet. Striking on different zones of the block produces beats of different ranges.

Woodblocks produce a loud sound without much effort from the player as their body is hollow. They are a fun and easy way to introduce kids to the concepts of beats and rhythms.

A jam block or gok block is a plastic version of the wood block. Despite being made of plastic, they’re sturdier than wood blocks. 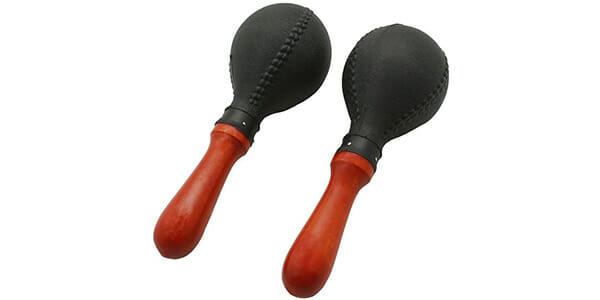 Kids don’t want to sit straight and focus on the music. They like to move things back and forth more than striking them at a certain spot. For such kids, shakers are the best percussion instruments.

Just like its name ‘shaker’, it is usually shaken to create rhythms. Two shakers can also be struck with one another.

Shakers come in cute shapes like a banana (called a banana shaker) or orange (you guessed it right – orange shaker). You can check out DIY shaker tutorials on the internet and make one for your kid. But don’t think they’re just musical joys.

Performers use shakers (of course, not those shaped like fruits and veggies) as a replacement for ride cymbals as they both generate similar rhythmic patterns. 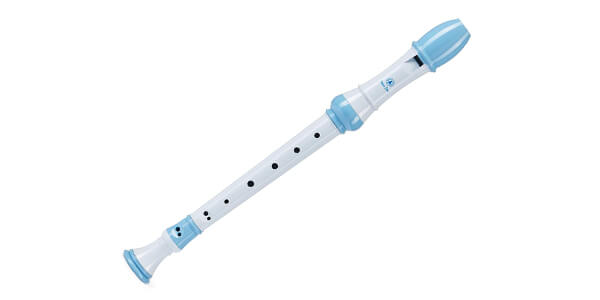 The recorder is a wonderful woodwind instrument for students. Yep, this is the same instrument mentioned in Shakespeare’s Hamlet. Though a flute is called a recorder in some European languages, they actually differ in many aspects.

Earlier versions of the recorder were made of wood. Plastic recorders were produced around the 1960s and their sound quality didn’t decline from the original version. Regardless of the material used, they all have the same basic structure to this day.

A recorder consists of a mouthpiece, seven finger-holes, and a thumb hole. Recorders come in various lengths and are classified into four types.

Carl Oriff popularized the recorder as a classroom musical instrument in the 20th century. People prefer the flute to the recorder as it could play more difficult music pieces. As we’re looking for children’s instruments, the recorder wins the toss here for its simplicity. Mastering it is a different game altogether.

For the kid to reap all the benefits of playing an instrument, he should be actively engaged in it. If not, you can ask him if he would like a new instrument. You already know, there are many instruments to choose from.