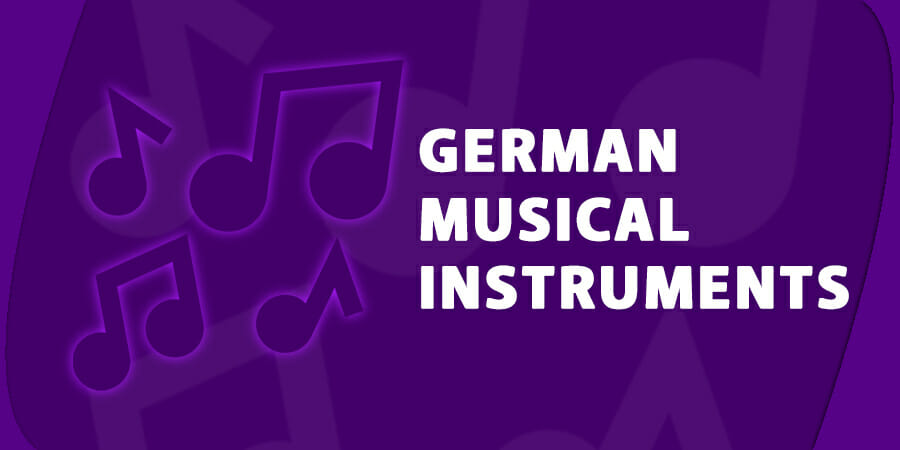 Germany holds the largest music market in Europe. From Beethoven to Hans Zimmer, many accomplished German musicians have given us beautiful pieces (earworms, if we might say). German classical music is acclaimed all around the world.

If we dig a little deep, we will be introduced to renowned musical instruments of this country that have helped several musicians make a mark.

Here are ten German musical instruments to learn about and they’re definitely worth your time.

Zithers were one of the prominent musical instruments in German history. At present, concert zithers and alpine zithers are found in several regions of Europe. It would take another long post to detail you about zithers. For now, let’s look into the waldzither.

Despite the existence of many types of zithers, waldzither was established as the national instrument of Germany because other similar instruments were neither affordable nor available. It still shares the same status with German lute a.k.a lute guitar, about which you will learn later in this post.

It is a string instrument played by plucking the strings with fingers and is closely related to the cittern. It has five courses with nine steel strings. The tuning is not standard but is open.

Waldoline is a variant of waldzither and has four courses of strings.

Complimenting its small size, the huemmelchen’s sound is softer than the normal bagpipes.

The name ‘hummelchen’, derived from the German word ‘hameln’, implies trimmed. It means the instrument is a reduced variant of the original German bagpipes.

Some sources claim that hummelchen is derived from the German word “hummel” for bumblebee, indicating the low-pitch buzzing sound from the bagpipe’s drone.

Bagpipes are considered a difficult instrument to master, as they require certain breathing techniques. Compared to the regular bagpipes, hummelchen requires less effort to play, and therefore, it is an ideal choice for beginners. 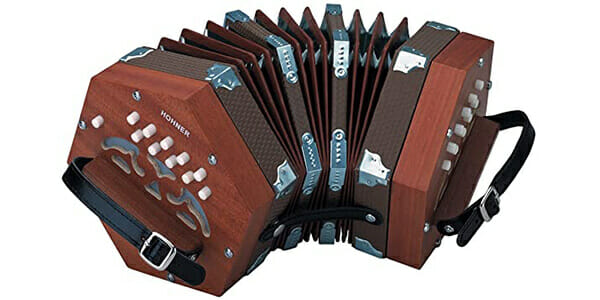 Concertina is a small musical instrument in which the buttons and bellows are moved in the same direction.

Don’t confuse it with the accordion because of its looks. An accordion can play a chord, but a concertina plays only a single note at once. Another difference lies in the position of the buttons. The buttons and keys of an accordion are at the front while a concertina has them on the sides.

Carl Friedrich Uhlig invented this type of concertina in Chemnitz (hence the name). The closest relative of the Chemnitzer concertina is the bandoneon, another German concertina.

The player holds the leather straps fitted on the sides of the instrument. Each button on the keyboards produces a different sound when the bellows are compressed or expanded.

Central Europeans have used the Chemnitzer concertina in folk music and some of them later migrated to the United States.

The bumbass has other names like bladder fiddle or poispil, and is used throughout the European continent. In the German context, it is known as the bumbass while the English call it the bladder fiddle.

The name ‘bladder fiddle’ comes from the fact that it is made with pig’s bladder. The inflated bladder is tied to the stick and the string runs between the ends of the stick.

Therefore, it is a monochord (a string instrument with only one string) and is bowed. The player stands upright and draws the bow over the string.

The structure remains the same in every country, but the German version calls for an additional bell or cymbal on the top. This is done for improved acoustics and aesthetics.

The modern relative of the bumbass is the cymbal-rich boomba. The boomba primarily focuses on loud percussion and is found in eastern Pennsylvania of the United States. The boomba is usually customized according to the player’s preferences, but the basic components do not vary.

A third type of famous horn, the Vienna horn uses double-piston valves and is therefore, closely related to the French horn than the German horn is. The predecessor of all these horns is the natural horn with no valves.

Single, double, compensating double, and triple German horns are available today. The single horns are the perfect learner instruments as they are less heavy. You can also spot jazz players rocking the single horn.

The German horn is irreplaceably used throughout the world, except in France and Vienna. 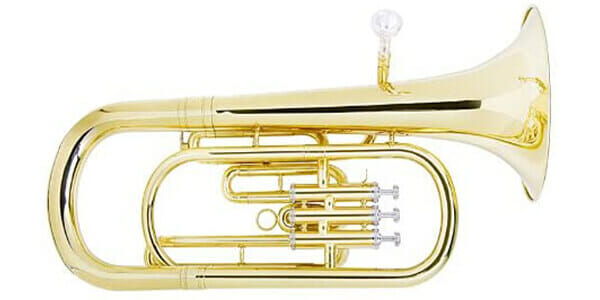 The bass tuba originally invented by Wilhelm Friedrich Wieprecht and Johann Gottfried Moritz had a wide conical bore and five valves with tuning slides. It was developed in the key of F.

Now, tubas are available in various pitches and the lowest-pitched tubas are known as the contrabass tubas. In fact, tubas have the lowest pitch among all members of the brass family.

In the United Kingdom and Germany, tubas are preferred in the original pitch of F. Four-valved tubas were designed for Richard Wagner, a German composer.

In the 19th century, the tuba was introduced as a replacement to the ophicleide in orchestras and concerts. It is the primary bass instrument in the present-day concerts. It can be played either as a solo instrument or along with more tubas and other instruments.

The German word ‘scheitholz’ means split logs of wood. The scheitholz or scheitholt is a stringed instrument and it is the oldest form of drone zither with more drone strings than melodic strings.

The scheitholt has a wooden soundbox with a headstock and two to four gut strings. The strings are sometimes made with brass. The modern version has a larger soundbox than the original one.

The instrument is placed on the player’s lap or a table. The strings are pressed with a wooden stick called noter. The left hand presses the strings and the right hand’s fingers pluck the strings with a plectrum. The playing technique resembles that of modern zither.

The scheitholt attained the peak of its popularity in the 19th century. By then, it had already evolved into the Appalachian dulcimer in several parts of America. 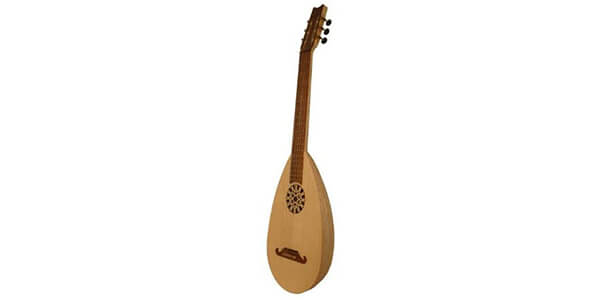 We’re now at the instrument that shares the status of ‘national instrument of Germany’ along with waldzither.

In the 20th century, Wandervogel, a countercultural movement saw the revival of folk music in Germany. The German lute or lute guitar is associated with this period.

It is a stringed musical instrument with a thicker soundboard than the lute. The wood of the soundboard is carved into artistic patterns and sometimes wooden disks are layered.

The headstock is lean and has wooden pegs or gears to tune the strings. A scalloped fretboard runs until the neck’s bottom. From there, the frets are independent and run down the soundboard. There’s also a functional bridge like that of a modern guitar. But, it also served aesthetic purposes.

The German lute has a rich bass sound and you should master the art of reducing the sustain to give your audience a good show. So, playing it can be tricky unless there’s enough practice.

A glockenspiel is a percussion instrument played by striking the plates with two or four unwrapped mallets made of plastic or metal. Occasionally, rubber mallets are used when a low sound is required. The plates when struck mimic the sound of twinkling bells.

The keyboard glockenspiel can be explained as a keyboard added to a glockenspiel to enable better playing methods through large keys. The player should be able to play the chords to exploit this instrument completely.

Therefore, the keyboard glockenspiel is placed in the keyboard section of the orchestra rather than the percussion section. But it is still counted as a percussion instrument.

The production of keyboard glockenspiels has almost stopped and if you’re lucky, you may find an old one on resale.

The bell piano or celesta is very similar to the keyboard glockenspiel and has replaced it with time. The sound of a celesta is much softer, though. Magic bells in the opera, The Magic Flute, is an example of it.

Nope, it’s not a typo. Daxophone and saxophone are different instruments. The word dax comes from the German word ‘dachs’ for badger. True to the name, animal sounds can be generated on this instrument.

Hans Reichel, the inventor of daxophone, was a German musician who mainly worked in improvisation and experimentation. He is also famous for reconstructing guitars by adding more fretboards and applying the 3rd bridge technique.

The daxophone consists of a wooden blade called the tongue. It is fitted into a block with contact microphones. One side is fretted and the unfretted side is covered with a sheet. The sound varies with the type of wood used in making the tongue. Denser the wood, darker the sound.

The instrument is played by bowing the free end with a double bass bow. Occasionally the free end is struck or plucked.

You can buy the instrument from retailers or build it yourself by following the documented tutorial on Reichel’s website.