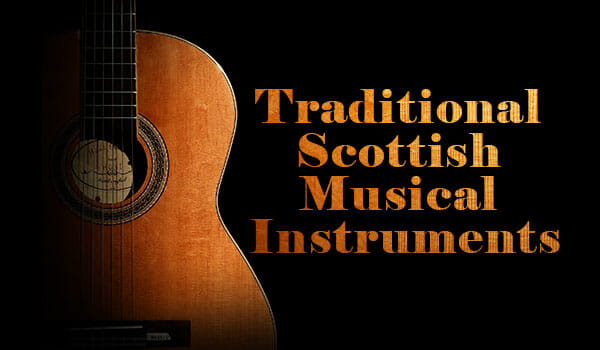 Celtic music, particularly Scottish music can be described as ‘rich and lilting‘.

Each region in Scotland has its style of music. However, traditional folk music never went out of style and is a common string that connects this entire nation. 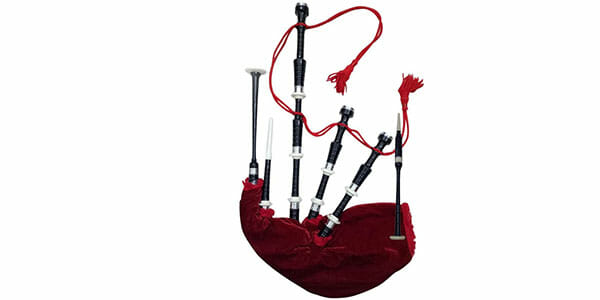 The intimate connection between the bagpipes and Scotland is known to many. Even in the American sitcom F.R.I.E.N.D.S, Ross tries to learn to play the bagpipes (for Mondler’s wedding) as Chandler is half-Scottish. Bagpipes are the national instrument of Scotland.

As the name suggests, bagpipes are a set of pipes connected to a bag. This bag acts as a container of air which in turn supplies continuous sound even when the player takes a break to catch a breath in between.

This unbroken supply of sound is strengthened by the presence of at least one drone for a set of pipes. This woodwind instrument has one or more chanters that have finger holes to create a melody.

Due to the prohibition, none played the bagpipes but made sure the instrument did not go extinct. People who owned bagpipes kept them behind locked doors until the permit was given.

After a few years, the permit was issued and bagpipes regained their glory.

The Great Highland bagpipe is a world famous bagpipe which had its beginning from Scotland and was used extensively in war times. 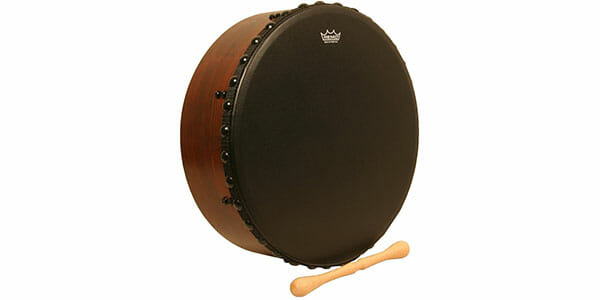 The bodhran is a percussion instrument of Irish origin. However, it made its place in the traditional music of Scotland and its origin is often wrongly believed to be from Scotland.

The bodhran looks like a simple drum with a circular frame supported by a wooden frame on the bottom. The frame is covered by skin with adjustable keys that enable the player to set it up according to the notes he wants to play.

This drum is played either with bare hands or with short beaters called the tippers. Though the bodhran is very basic in looks, there are versatile ways to play it and the player rests the drum on his leg while performing.

Having a playable skin along with a playable edge is the stand-alone feature of the bodhran and makes it an ideal instrument for any occasion.

How many drums with a playable edge do you get to see often?

To play this simple instrument, you gotta become dexterous by putting yourself through a regular course of practice. 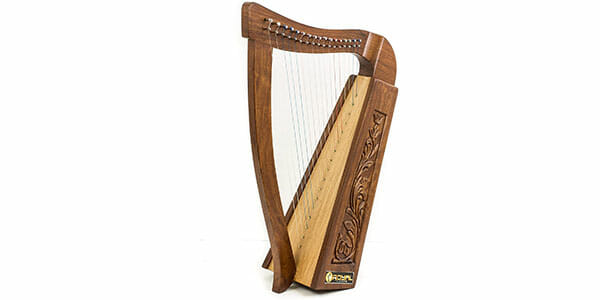 In the 15th century, the bagpipes became the national instrument of Scotland. Before that, it was the Celtic harp (that’s another name for the clarsach) that had this honor.

Harpers were given a high status in society and took part in every royal ceremony. This is evident from the paintings and stone carvings of that period.

The strings are made of metals like brass or iron and the sound-box is made from a single piece of wood. The strings have a high resonance which is tough for the player to balance.

While it is a common practice for the right hand to play the treble and the left hand to play the bass, it is exactly the opposite while playing the clarsach. This is a major problem when switching to play the regular harp even though the strings and tuning mode are similar.

Many other instruments such as the fiddle evolved from the clarsach.

Usually, clarsach players begin their classes at a young age due to the extreme difficulty involved in learning. 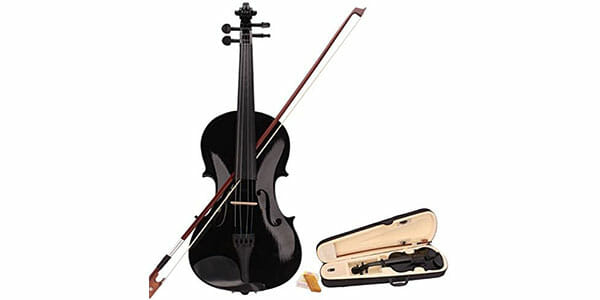 The fiddle is played by the ear and can be closely associated with the playing of bagpipes. Another Scottish mark, the term fiddle is often used interchangeably with a violin.

However, the fiddle has a varying flat-bridge structure from that of a violin which facilitates easy hand coordination concerning the bow and the strings. A flat-arched bridge in the fiddle allows the player to switch easily between different strings. The fiddle has a brighter sound compared to other bowed stringed instruments as its strings are made of steel.

What makes the use of fiddles in Scotland different from the rest of the world is their complete exploitation to produce all tonal ranges and rhythms, giving the fiddle a whole new recognition.

Scots made their mark in fiddling by inventing techniques like ‘the Scotch snap’. The Scotch snap is still a prominent technique used in their country dances.

Their art of fiddling involves a lot of energy that gives a punch in the output with multiple rhythms changing in the blink of an eye. 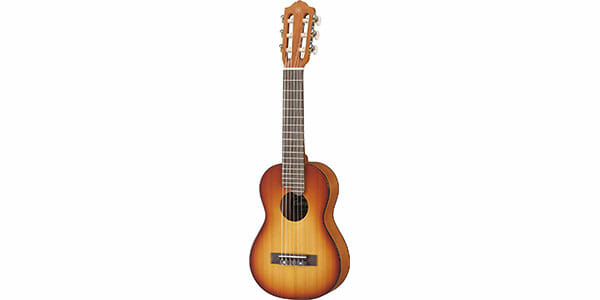 The guitar is a stringed instrument with frets. It is a universal instrument which is familiar to everyone. In each part of the world, the style of playing the guitar varies and hence each region requires their own description of the guitar.

The strings of a traditional Scottish guitar were originally made of gut, but now synthetic polymer is used.

The number of strings is usually six but can extend up to 18.

The presence of a headstock is not mandatory. When a guitar is made without the headstock, tuning keys are fixed on the body. Therefore, the absence of the headstock does not affect tuning.

Scottish style of guitar playing has remained constant over the years which is why there are many music (sheet) books on how to achieve the Scottish tone while strumming your guitar.

For the Scottish sound, the guitar is tuned to play perfect-fifths. This tuning helps the guitarist to bend the strings easily which gives the smoothness and continuity similar to the signature Celtic music.

This traditional Scottish musical instrument falls under the category of woodwind instruments and is mainly associated with the peasantry.

Shepherds too played this instrument.

The structure consists of a pipe and an amplifying bell made of a single reed and horn respectively. The number of chanters was reduced to one by the time the stock-and-horn could be brought into the limelight.

The pipe has 7 holes to control the melody and another hole on the back which is supposedly used to set the octave range. The stock-and-horn is often considered similar to the hornpipe and the pibgorn. Pibgorn is a traditional single-reed instrument of the Welsh.

Robert Burns, a Scottish poet is often credited for the clear description of the stock-and-horn. According to historians, by then, the instrument has become a rarity.

However, Burns managed to get one and described it in a letter to a music publisher. His letter tells that the instrument seemed to be an odd one. But, Burns made it an emblem on his self-designed coat.

Fun fact: The National Museum of Scotland preserved the chanter of Burns’ stock-and-horn and is up for display. If visiting Scotland is in your bucket list, you should add this to your trip. 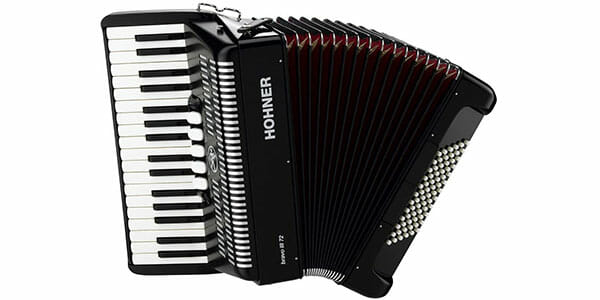 Even though the accordion is not of Scottish origin, it was popularized in Scotland by folk groups and now, when you say Scottish music, it is not limited to bagpipes and fiddles.

It is a box-shaped instrument with keys and bellows. Keys only produce notes and the rest of the features are under the control of the bellows. The bellows regulate the movement of air between the reeds that in turn affect the volume, clarity, and pitch.

Based primarily on the construction of the bellows, there are several types of accordions.

The accordion is well-known throughout the world (thanks to Europeans, who made it possible) and accordionists are spotted playing in pop or folk bands.

Mid-19th century can be called the accordion’s golden age.

When introduced to it for the first time, people admired its output volume which is super louder than the other folk instruments. The fact that it needs no tuning didn’t go unnoticed either. 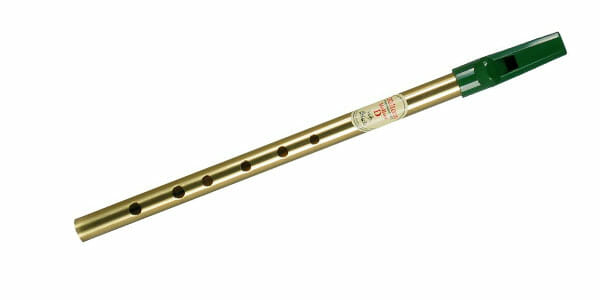 The tin whistle is also known as the penny whistle. It is a simple woodwind instrument with 6 finger holes and just like the name, has its mouthpiece shaped like a whistle (such instruments are known as fipple flutes).

Fun fact: You can get this instrument if you have a penny in your pocket. Hence the name ‘penny whistle’.

The instrument is not hard to play and the added affordability made it a common instrument found in Scottish households of the 19th century.

Children played it like a toy but there were professional whistlers (yes, that’s the word for players of tin whistle) who gave performances.

The playing techniques are relatively simple and the pitch is usually high. The notation of tin whistle music can be done in three ways and out of them, tonic solfa notation is used while teaching children.

Julie Fowlis is a Scottish folk singer who includes the tin whistle in her tracks. 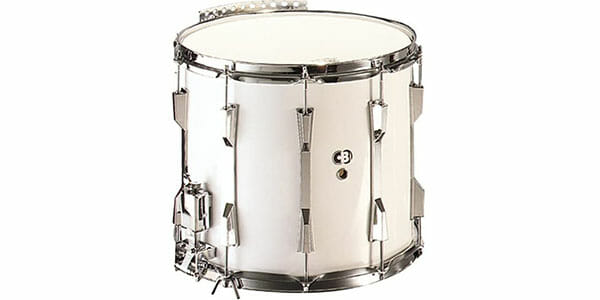 There are many types of tenor drums but we’re talking about the Scottish tenor drum here.

The Scottish tenor drum is a percussion instrument used widely in the country during pipe band’s marches. Though called a pipe band, it comprises both pipers and drummers.

Among those drummers, at least one tenor drummer is mandatory. Else, it is not a pipe band.

The tenor drum has two heads but only the top head is playable. It is played either with bare hands or mallets. Mallets are compulsorily used in marches, though.

During competitions, each pipe band has more than 5 tenor drummers. As there are various styles in playing the tenor drum, many drummers will help in producing special effects that are rich in texture.

There is no specific rule regarding the sheet notation for a tenor drummer. The drummer and his band can choose depending on their performance and audience. 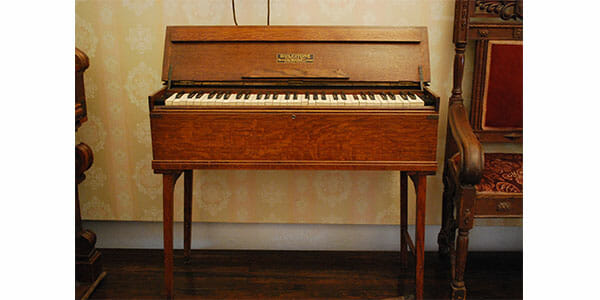 The dulcitone is an idiophone and was made first in Glasgow. The keys of the instrument activate hammers that hit the built-in tuning forks to produce sound.

In a piano, strings replace the tuning forks. (There are many other differences, but this is the main structural difference.)

The dulcitone was well received by musicians due to its light-weight (which allowed them to carry it to their concerts) and for needing no tuning.

However, these did not come without the price of extremely dull volume that demands an amplifier for live performances. Therefore, musicians, though initially impressed, started replacing the dulcitone with louder alternatives, making its fame short-lived.

Modern musicians provided the dulcitone a platform to make a comeback as connecting an amplifier to the instrument is not a tough thing now.

The next time you hear someone saying “Scottish music is all about pipes!”, you know what to tell them.