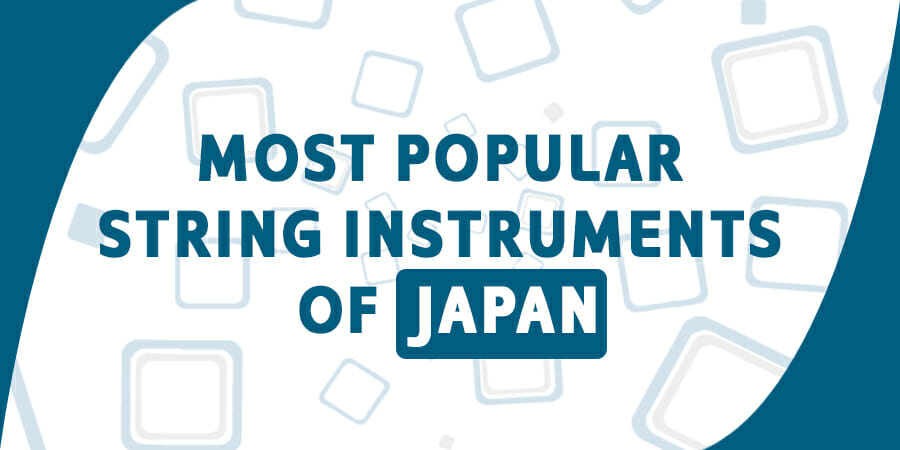 The land of the rising sun, Japan, has a rich and diverse music history. It’s an art form that combines the spell of vocals and the beauty of instrumental sounds. It’s seen as a form of emotional and self-expression that strengthens self-identity. Japan’s music and its popular instruments have a distinct sound and vibe making it all the more unique.

Instruments in Japan range from wind, percussion, and string. They were most commonly used in Japanese folk music. These instruments played a huge role in reshaping and defining Japan’s history and culture in music. Today, you will find Japanese instruments’ virtuosos around the globe and not just in Japan.

In this article, we will learn about the 7 most popular string instruments of Japan. 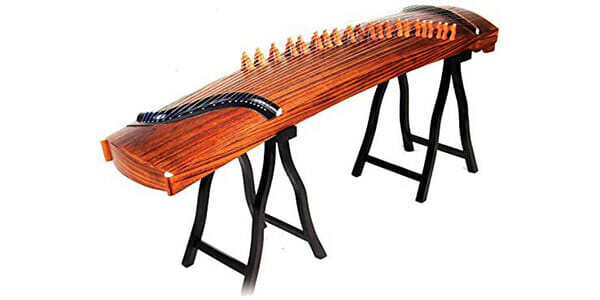 We’ll begin with the national instrument of Japan, the Koto. It was introduced in Japan from the Chinese string instrument, zheng, and resembles the Korean gayageum, the Vietnamese đàn tranh, and the Sundanese kacapi. Koto has an elongated body of about 180 centimeters in length. It typically has 13 silk strings and 13 bridges. Its body is made of wood and the strings stretched across it are plucked either with a pick or with fingers. Commonly, the koto is played while sitting down with the instrument placed in front or at the side of the player.

Since its debut in Japan, the Koto has gone through several modifications to suit local musical needs. There are many varieties of the koto which differ in size, shape, and number of strings. One such variety is the yamato-goto or the “wagon” that the aristocrats used for entertainment in olden days.

With the influence of Western music, koto’s prominence has significantly lessened and is mostly being used in Japanese classical music. However, one cannot forget David Bowie’s instrumental piece in his 1977 song, ‘’Moss Garden’’ with the koto. 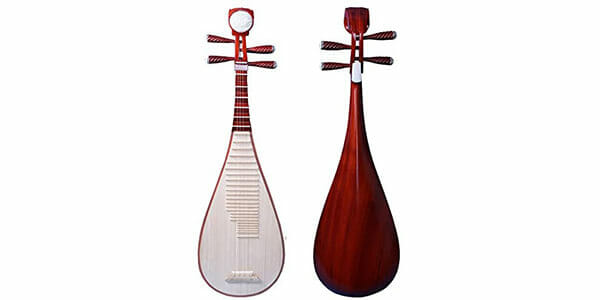 This plucked instrument’s structure is like a lute, with a short neck and a pear-shaped body. Biwa also originated from China, where it was popular by the name ‘’pipa’’ or the Chinese lute. It entered Japan in the Nara period (710 AD – 794 AD). This instrument was mostly used to tell stories or as musical accompaniment for blind monks while they recited scriptural texts. The biwa is also regarded as the chosen instrument of the Japanese Buddhist goddess, Benzaiten.

Biwa is 60 to 106 centimeters in length with a wooden body and 4 or 5 silks strings that differ in thickness. The varying thickness for the strings is used to create distinct tones and sounds in each of the strings. Instead of plucking it with fingers, it’s played using a ‘’bachi’’ or the plectrum. There are more than seven types of biwa, defined by the number of strings, frets, sound production, type of plectrum, and their use.

While you are here, here’s a fun fact about Biwa: Japan’s largest freshwater lake earned its name as ‘’Lake Biwa’’ because its shape resembled the instrument.

This instrument differs from all the Japanese stringed instruments as it’s the only one played using a bow. I guess we can call it the violin’s Japanese cousin that was used in jazz and blues. Typically, the kokyu is played while kneeling on the floor and holding it upright on or between the player’s knee. The bow is moved in a horizontal motion across its strings. Moreover, Kokyu has its origins in Japan’s city Okinawa, where it’s referred to as ‘’kucho’’. It’s similar to the kokyu but originated in the city through Indonesia and Malaysia.

The Kokyu resembles the Japanese instrument Shamisen but is much smaller. It’s 70 centimeters in length with an ebony neck, a hollow body, 3 or 4 strings, and 3 tuning pegs. Traditionally, the kokyu has only 3 strings, but the four-stringed version became increasingly popular in the 20th century. The body of Kokyu is made from wood today, but traditionally it’s made of coconut. Both of its sides are covered with cat skin or snakeskin in Okinawa. In mainland Japan, its body is square-shaped, whereas in Okinawa it’s round or bowl-shaped.

Tonkori is a string instrument that was played by the East Asian ethnic groups of Hokkaido known as the Ainu people. However, it’s assumed that this instrument was developed in Sakhalin, an island in Russia. It has 5 strings and 2 bridges, one at the top and the other at the bottom. This plucked instrument does not have any frets and is played open.

This five-stringed instrument was ideally used to accompany songs or dances or played solo. By the 1970s the instrument was buried and forgotten but saw a resurgence in the past few years along with an increased interest in Ainu heritage. The most well-known tonkori musician and a participant in the instrument’s revival journey is Oki Kano. He plays the traditional Ainu instrument in his performances and combines it with various styles of music such as reggae, dub, etc. 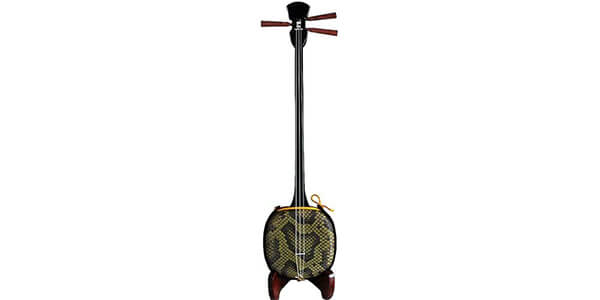 The neck of Sanshin is made of wood, but traditionally the wood of the Okinawan Ebony tree is used. The tree is famous for its durability and pure sound quality. Sanshin has a round voice box that is covered with snakeskin, typically with python skin. But because of stricter animal protection laws and skin damage issues, artificial Sanshin skin was introduced. The tuning pegs of the Sanshin are usually made from the same wood used for its neck.

The instrument was considered the soul of Okinawan folk music, is used in traditional dances and even Okinawan pop. It’s heard in almost every Okinawan ceremony, from birthdays to weddings to graduations. Sanshin is played by plucking the strings either with the fingernails or a plectrum. 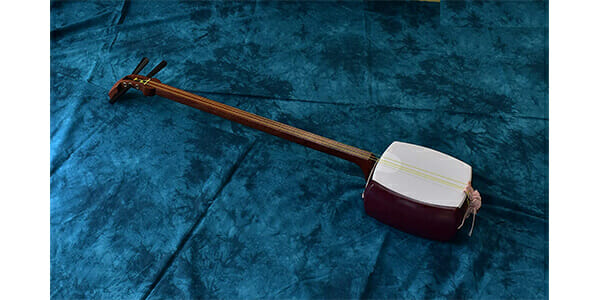 One of the most popular Japanese instruments even now is the Shamisen. Also known as ‘’samisen’’ or ‘’sangen’’. It also originated from the Chinese “sanxian” through which the Okinawan designed the Sanshin, which led to the discovery of the Shamisen. This instrument has 3 silk or nylon strings, 3 tuning pegs, and a hollow wooden body similar to the Sanshin. The skin used for covering the body depends on the musical notes a player wishes to play. But, back in the day, dog or cat skin was used.

Shamisen is of 3 sizes, differentiated by its neck thickness. They’re hosozao, the thin neck; chuuzao, the medium neck, and futozao, the thick neck. It’s fretless and is thinner than a guitar or a banjo’s neck. Players use a plectrum known as “bachi” to pluck the instrument. The bachi helps in producing the original Japanese tune.

Shamisen’s construction varies in shape, which depends on the genre or skill of the player. For instance, in the Edo period, the shamisen used to accompany the Kabuki, had a thin neck to harmonize with that genre. Whereas, the one used along with vocal performances and puppet plays had a long, thick neck to complement the vigor of those genres.

Fortunately, the Shamisen is not forgotten like the other Japanese string instruments. It has changed and made its way into pop music. Modern shamisen players like the Yoshida Brothers have introduced Shamisen music in the modern music industry. They even organize Shamisen workshops so more younger people know and learn about this instrument. 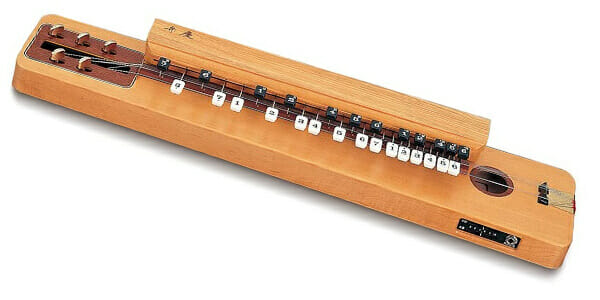 Also known as the Nagoya harp or Taishokoto in East Africa. Its name is derived from the Taisho period, where it originated. It was created in 1912 by the musician Goro Morita in Nagoya, thus the name Nagoya harp. The musician found the Western instruments inspiring, which led to the creation of a stringed instrument with the mechanics of a typewriter.

The Taishogoto resembles the Indian instrument “bulbul tarang” which also uses keys to play the strings. While Japanese stringed instruments usually use silk for their strings, the Taishogoto uses metal strings. The body of this instrument comprises a long and hollow box with strings stretched across. The keys are present above the strings which alter its pitch.

To play Taishogoto, a pick is used to pluck the strings while pressing its keys. It’s used in a variety of musical genres, from children’s music to Japanese ballads to pop music.

To this day, the above instruments are used in shows, festivals, and other events held in Japan. Although they are considered too ‘’ancient’’ by the younger generation, they remain relevant to most of us to this day. Regardless of what people think, Japanese instruments have revolutionized the culture and history of Japan’s music.