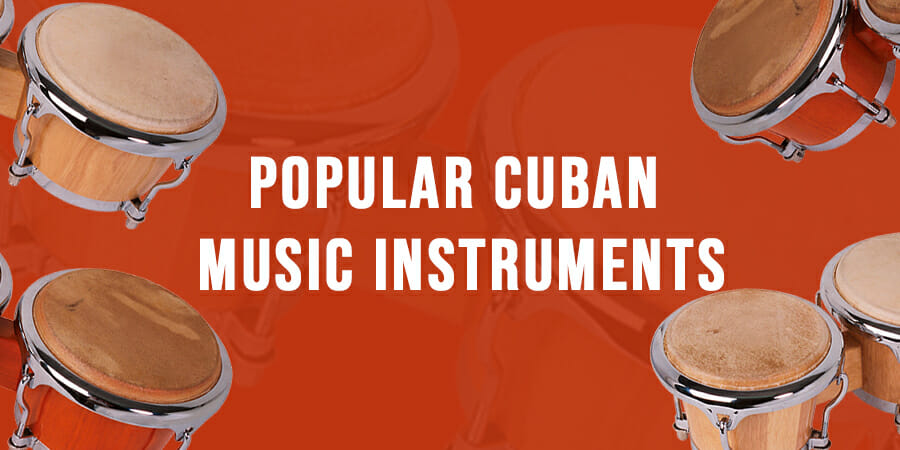 Cuba is one of the most culturally vibrant countries, not only in the Caribbean but also in the world. Their music is renowned all across the globe due to their unique style. It is a brilliant amalgamation of several African and Spanish musical traditions.

Their musical instruments, while being quite similar to their African and Spanish counterparts, have something special that distinguishes them from either of those.

In this article, we’ll guide you through the most famous Cuban music instruments that are praised by artists all over the globe. So without further ado, let’s begin.

Congas, also known as tumbadora, is a percussion instrument that has its roots in Africa. It is now one of the most widespread types of drums that are played in Cuban music. In essence, congas are long barrel-like single-sided drums which are used in genres like Conga and Rumba. The drums get the name Conga from the music genre itself.

There are three types of conga drums. These are Quinto, which is the lead drum and the tallest, the tres dos or tres golpes, which is the middle drum, and the Tumba or salidor, which is the shortest of them all.

Congas have become immensely popular among western countries due to the growing popularity of Latin music genres. They are heavily used in several genres including salsa, Latin rock and Afro-Cuban jazz. They are usually played by hand; however, there are several musicians who often use mallets.

Many other Latin American countries, including the Dominican Republic and Columbia, also use Conga drums in their music.

Bongos are another kind of drums that are very famous throughout the world. Though their exact history is not clear, it is believed that they were introduced by Africans in the eastern regions of Cuba in the 19th century. Since then, Bongos have gone on to define some of the influential Cuban music genres including Son Cubano, Afro-Cuban Jazz and Salsa.

Of these genres, Son music was the reason for the meteoric rise of Bongo drums. As this kind of music became widespread in Cuba from the onset of the 1900s, so did the Bongo drums.

Bongo players are called bongoseros and history has seen some of the best bongoseros come from Cuba, especially after the 1930s. These include José Manuel Carriera Incharte and Óscar Sotolongo, both of whom were influential in the rise of these drums.

The 1940s saw many Cubans migrate to the US, many of whom brought the Bongos with them, which introduced these to American listeners for the first time.

Batá along with the Congas and the Bongos form the trinity of Cuban drums. Collectively, these three are the most popular Cuban musical instruments. Most music groups use all three types of drums in their songs with different players.

Batá is different from the other two drums that we have mentioned before. Firstly, it has a unique hourglass shape and is double-sided, with one side larger than the other. Secondly, it is supposed to be held by the player.

Like the other two drums, Batá has its origins in Africa and is believed to be the instrument of choice of the Yoruba people of Nigeria. Thought to be more than 500 years old, Batá was brought to Cuba in the 1800s during the slave trade from Africa and has found a place in Cuban culture since then.

The Yoruba people used it primarily for religious ceremonies, and more recently it found its way into secular music as well. Since the 1970s, the use of Batá became widespread as musicians began using it in modern music genres like Hip-Hop and Cuban timba.

Catá is a quite unique percussion instrument that you will probably not see anywhere else in the world. It is basically a type of an idiophone made out of a hollowed-out tree trunk. The players have to strike this trunk with mallets or sticks to produce the desired sound. It sounds almost like claves with a slightly different pitch.

The Catá is believed to have a Congolese origin and brought to the island by slaves during the late 19th century. Currently, it can be seen in the Eastern part of Cuba and is used in several genres including rumba, yuka and tumba francesa.

Chekere or abwe is another percussion instrument from Cuba that has its roots in West Africa. It is quite fancy as it is made from natural and eco-friendly materials. The Chekere is made from a dried gourd which is covered with a net. This net has beads woven into it and sound is produced by shaking the gourd or beating it against the hands.

The gourd needs to be dried for months before it can be turned into a chekere. After that, the pulp and seeds are removed then the mesh is added in the end. It is quite similar to the maracas and is used in several Afro-Cuban music genres as a side instrument.

Like the Chekere, Guiro is another percussion instrument that is made out of a dried-out gourd. However, this gourd used here is elongated rather than round-shaped, and the playing technique is different as well. Parallel cuts or engravings are carved out on a side of the gourd and the sound is produced by rubbing a stick on these cuts. The sound is quite unique and something that you will never hear in any other type of music.

The history of Guiro is not well known by experts; however, many believe that it has Aztec or African roots. As of now, it has found its way into numerous Latin American genres which are not limited to Cuba only. Regional variations of the Guiro can be found in Colombia, Brazil and the Dominican Republic as well. Cuban genres like son, trova and salsa heavily use the guiro.

Timbales, also known as pailas, are the first instruments of this list that are of Spanish origin. They are a type of shallow single-headed drums with metal casings. Although they come from Spain, their current form was perfected in Cuba itself from the beginning of the 20th century.

Timbales is the Spanish word for kettle drums and initially, they were used by military or street bands. Over the years, they have found more musical use to them. The player is known as a timbalero, and they are famous for creating mind blowing drum solos on these timbales.

Timbales are arguably the most commonly used drums in several Cuban music genres including Mambo, Salsa, Cha-cha-cha, timba, Songo and many others. They are also used by many non-Cuban musicians, most popularly by John Dolmayan, who is the drummer of famous American rock band System of a Down.

Tres, which means three in Spanish, is a stringed instrument very similar to the Guitar. The name tres implies that it is a three-course instrument. It can be found in many Latin American countries with the number of strings in multiples of three. The Cuban tres, in particular, has six strings while the Puerto Rican version has nine.

It is one of the most vital instruments of several Afro-Cuban music genres, especially for Son Cubano. Being a guitar it is predominantly of Spanish origin with subtle African and Cuban hints, one of them being its smaller size. The tres was introduced in Guantanamo in the late 19th century after which it gradually began differentiating itself from its Spanish counterparts. This was because relations between Spain and Cuba were deteriorating and Cuban musicians wanted an instrument to distinguish themselves from the Spanish.

The early decades of the 20th century saw Son Cubano becoming increasingly popular, which naturally brought the tres to the limelight. Several notable players sprung up throughout the country including Eliseo Silveira, Carlos Godínez and Niño Rivera.

Laúd is another stringed instrument of Spanish heritage and can be found in other areas that were once ruled by them, including the Philipines. The Laúd is usually played by plucking the strings with a pick and is part of many folk music genres.

There are slight differences in the types of Laúd in different countries. For instance, the Philippines version has 14 strings while both Spanish and Cuban versions have 12. The Spanish and Cuban varieties differ as well. This can be seen in the distinct shape of the Cuban Laúd and the fact it has short scale length and higher tuning.

Trompeta China is the most special instrument of this list as it doesn’t have its roots in Spain or Africa. As the name suggests, this instrument is a gift by the Chinese to the Cubans. It was introduced to Cuba by Chinese immigrants who brought it with them during the colonisation period during the late 19th century.

Trompeta China is now an integral part of Cuban tradition and is extensively featured in their Carnival music, most notably in Santiago. It is essentially a suona, which is a traditional Chinese wind instrument, however, the playing style of Cubans is considerably different from that of the Chinese. These days many of the trompeta china players are not from Chinese ancestry and the instrument is firmly ingrained in Cuban culture.