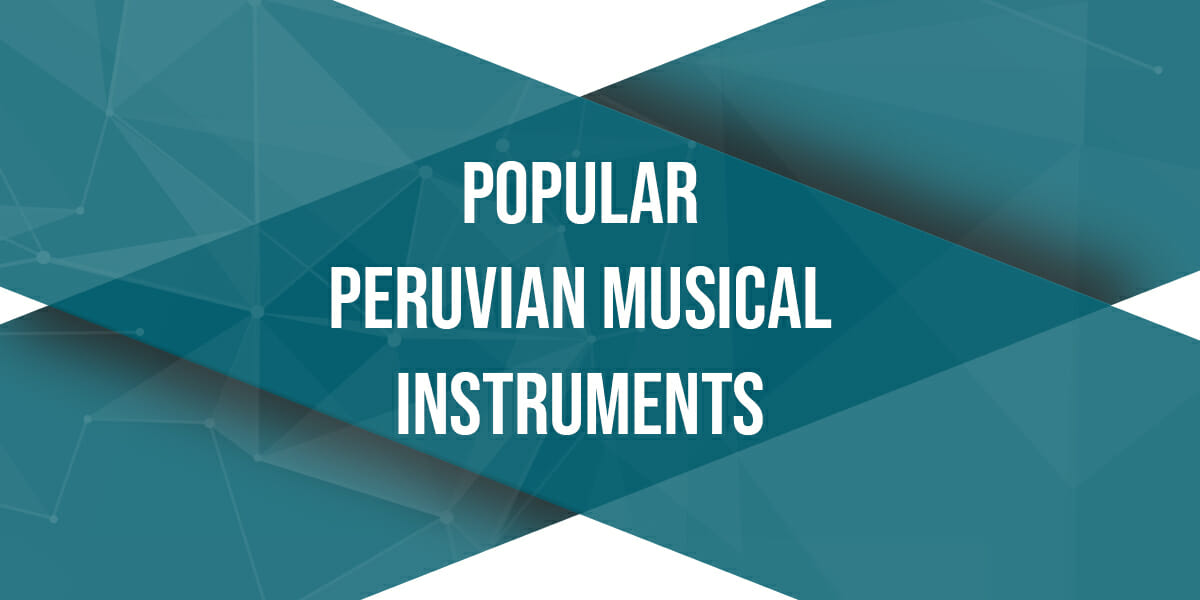 A trip to Latin America opens up a world of diverse cultures and traditions. Peru, being one of the most important countries of the South American continent is also overflowing with a brilliantly varied cultural and heritage. Many of us are familiar with the images of Peruvian folk wearing bright, colorful ponchos and playing pipes and flutes.

The diverse musical scene of Peru is a fascinating amalgamation of traditional native music, as well as the music and cultural influences of Spanish colonizers. African slaves who were brought to Peru by the Spanish have also left their mark on the Peruvian music and culture. Clearly, the popular musical instruments from Peru bear these influences as well. It is also true that the Peruvian percussion instruments reflect the influence of Afro-Peruvian population, while the harmonies and stringed instruments appear to have been contributed by the European settlers.

Let’s look at some of these interesting Peruvian musical instruments and learn more about their significance in the Peruvian culture. 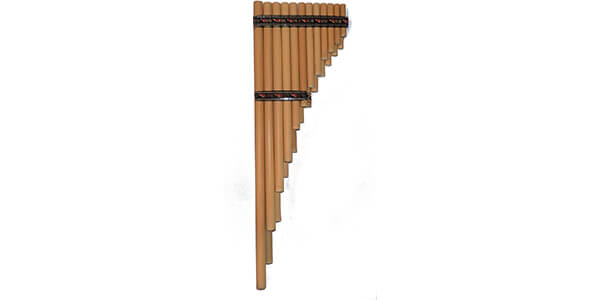 The Peruvian panpipe is called a Siku or a Zampoña in Spanish. Several bamboo flutes or pipes of varying heights are arranged in the order of their lengths to create this traditional panpipe.

The Siku is played at almost every folk cultural event and especially in the Andean musical genre called Sikuri. In fact, it is believed that different communities traditionally had their own type of Siku with unique tuning, size and shape. With modernization, some standards have evolved and now there are about 13 pipes in the standard Peruvian Siku.

The Pinkillu is a flute which is commonly played not only in Peru but in other South American countries as well including Argentina, Chile and Ecuador. The Pinkillu can be played with one hand and that’s why you will always find the performer merrily playing on a drum or other instrument with his free-hand.

The Pinkillu is a long flute, about 1 meter in length and usually made of bamboo. But it is not uncommon to find Pinkillus made of animal bone or wood. The instrument is deeply rooted in the rural and country music, and is played during the rainy season to celebrate farming and cattle rearing.

The Huancar or Wankara is a popular percussion instrument of the Andean region including the countries of Peru, Chile, Bolivia and Ecuador. It is a large-sized drum, hung vertically around the neck and played with mallets. The drum-head is made of fine animal leather and yields very clear loud beats.

It is believed that the Wakara originated in the pre-Hispanic era, during the Inca civilization period. The drum is usually associated with the tribal rituals and rites of Peruvian aborigines. The Wankara is usually played by men only. 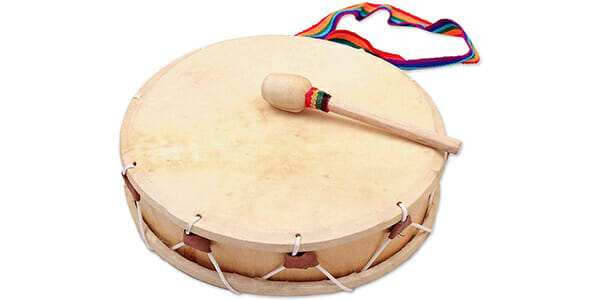 The Tinya (also known as the Kirki or Quechua) is also a very popular percussion instrument which is believed to have originated in the pre-Columbian period. It is a small hand drum, which is also played by women.

The drum is hung around the neck and can be played single-handedly. This is why, it is commonly found to be played simultaneously while the performer is already playing a panpipe or flute. The Tinya is played during Peruvian dance performances to give beat to the dancers. 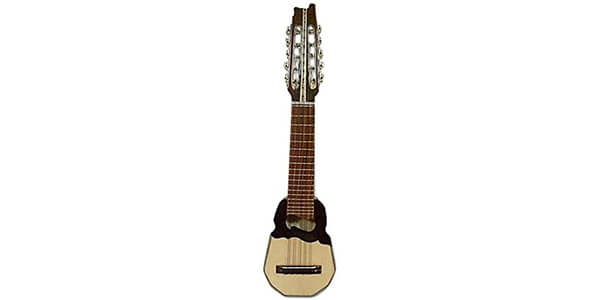 The Charango is one of the most important Peruvian musical instruments and has rightly deserved its honor as the national instrument of Peru. This instrument resembles the lute but carries a distinct Peruvian character. These days the Charango is made of wood but traditionally it was made of armadillo’s shell.

The Charango has 5 sets of two nylon strings each and tuning keys on either side of the neck. The back of the instrument may be decorated with engravings of Inca gods and other traditional Peruvian art. The Charango is played during traditional as well as contemporary music performances and events. 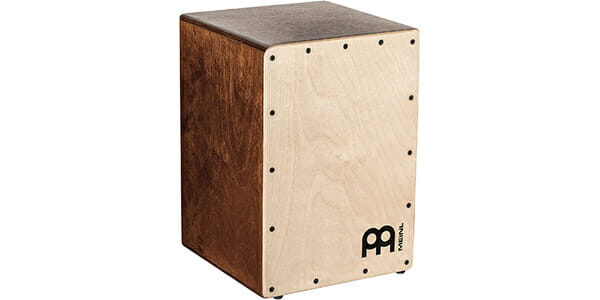 The Cajon is a percussion instrument with a unique minimalistic design and quite a novel way of playing. The instrument is made of wood and shaped as a box. It has a sound-hole at the back. The Cajon may be played by hand or with mallets. The performing artist usually sits on the box and beats its side with both hands while singing and swaying to the music and beats. Usually, the striking side of the Cajon is made of a thinned wooden sheet as compared to the remaining five sides. Modern enhancements have seen addition of cords and bells to the Cajon to add more sound effects.

The instrument is believed to have been brought to Peru by the Africans, and was traditionally played by the slaves as a leisurely activity. Today, the Cajon has found popularity in almost every genre of Peruvian music and also around the globe.

The Bandola is quintessentially a Spanish stringed instrument, adapted and embraced by the Peruvian folk. It resembles a mandolin with a flat back and 10-12 gut strings. The wooden body is pear-shaped. It is quite small in size with a short neck. The instrument is played by plucking at the strings with a plectrum. There are quite a few different versions of the Bandola found in Peru which reflect its popularity in the local cultures. 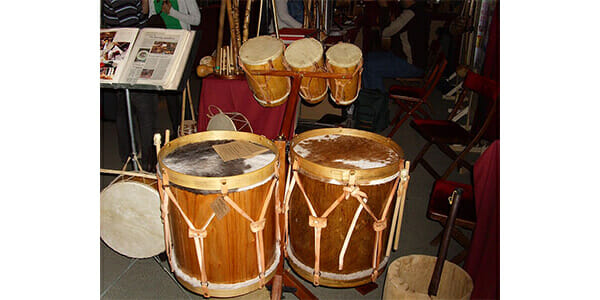 The Bombo is a cylindrical drum popularly played not just in Peru but in many areas of the Andean region. The drum is believed to be of European origin. It is usually double-headed. Animal hide, usually goat skin, is stretched over the open edges to form the drum-head. It’s not just a leather cover, but the fur is also retained. The drum yields a deep muffled bass sound and is played alongside marching bands during weddings and dance performances. 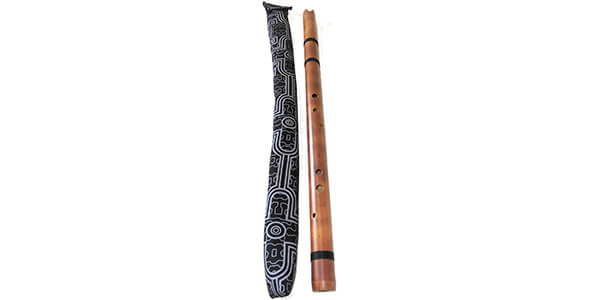 The Quena is among one of the ancient wind instruments from South America. It is a simple vertical bamboo flute with 6 finger holes and a U-shaped cut at the top for blowing in air and creating tunes. It is believed that in the olden days, the Quena was also made of clay, stone, or bone. The flute is played in traditional religious rituals and ceremonies, and is now also common in various genres of world music. 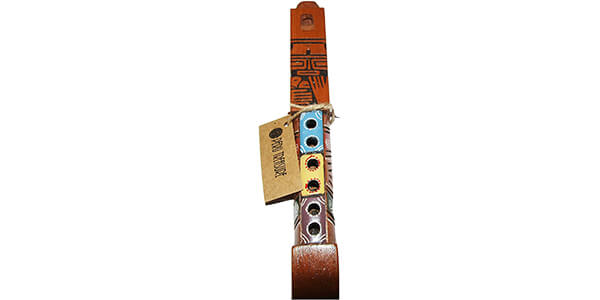 The Tarka is a block-flute which is somewhat difficult to play and master. The angular and short design of this flute requires strong breath and control. The instrument creates deep penetrating notes. It is ornamentally decorated and made in three different sizes. Most often all three types of Tarka are played simultaneously in harmony.