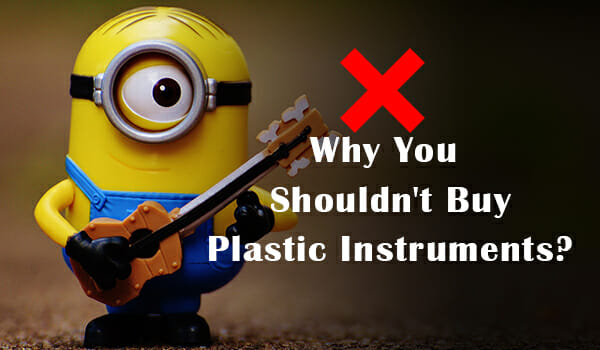 We’re all aware that plastic is really bad for the environment.

Some of us even try to reduce our ecological footprint but you can’t fully get rid of the material.

There is, inevitably, plastic on either food packaging or bottles lying around.

In cases like these, you can switch it up. Plastic bottles can be used as pencil stands or a plant pot. Plastic bags can be replaced by jute or cotton bags.

There’s a lot of upcycling you can do with plastic.

But you can never fully get rid of plastic.

What does this have to do with instruments?

Well, regardless of its shape and form, plastic is still bad for the environment.

We’ve also seen the gruesome video of a 10-centimetre straw being pulled out of a turtle’s nose.

If you haven’t watched it already, you must.

Not to make you squirm or scar your eyes, but to make you realize the adverse effects our actions have on the planet.

Now that we’ve successfully started on a grim and sad note,

Let’s talk about why plastic is bad for the environment…

Just take a look around your own house. You can only imagine how much plastic one house alone disposes on a daily basis.

Where Does All The Plastic Go?

They’re either left in the landfills or thrown into the ocean. So, if there is one turtle with a straw stuck deep in its nose, there are millions of animals with pieces of plastic in their stomachs or stuck between their fins.

To make things worse, there are about 150 million metric tonnes of plastic waste in the oceans.

It’s like filling up a big truck with plastic and dumping it into the ocean every minute.

If this goes on, there will be more plastic than fishes in the sea.

That should scare you.

Why Is Plastic So Bad?

Oh no, it does deserve a villainous name.

Plastic on any land, whether it’s in the dumps or on the ocean’s floor does not decay into the soil.

Plastic is non-biodegradable and takes around 400 years to decompose into the ground.

Why Not Plastic Instruments?

I get it. Plastic instruments are cheaper than metal or wooden instruments. They can come painted in any color and they look pretty cool.

But that’s about all as to why plastic instruments can be preferred over metal.

But, let me tell you this. There are so many brands and so many instruments for you to pick from. There is an array of prices that you can choose your instrument from.

I have had experience with a plastic instrument. And no, I’m not talking about the pianos and guitars we get as kids.

But, it’s pretty much the same feeling.

My first instrument was a plastic flute. I always wanted to learn to play the flute; and for a stubborn teen, my parents bought me a good quality plastic flute.

I practiced on it for almost 3 months after which I faced initial problems with it.

For instance, I chipped the end of the flute once. It was unfortunate that it chipped on the side that you blow into.

It would produce the most ridiculous sound in the middle of a song; that I would be practicing on the flute.

Eventually, the flute dropped quality. It became less sturdy and started to lose a lot of its power.

I even tried a plastic ukulele.

I know, guilty as charged.

The plastic framework did not hold the strings together for too long. The strings eventually got so loose that it started to sound like I was playing the ukulele in slow motion. Slowly, the guitar started losing paint on its body. The paint started to chip off and strings got loose to a point that I was scared to play the instrument.

I have always been conscious of the kind of waste I’m producing. I’m always curbing the urge to throw away something that is of no use to me. That’s one of the biggest problems I’ve had with plastic musical instruments. Eventually, I did have to give it to a carpenter, who made a tray and other small items out of it. There was practically no one who could bring it back to its original shape and bring back the quality that it promised.

If we even get past personal experience, some of the reasons you shouldn’t invest in a plastic instrument are because…

Once the plastic framework of your instrument loses its sturdiness, it becomes harder to practice on the instrument. The next best thing you would think of doing is to get rid of it.

As we know, plastic does not decompose into the soil easily.

With a metal or wooden instrument or even brass instruments, there is a very low chance that your instrument will lose its quality. At least for the first few years.

Think of it as a phone. Would you rather prefer a metal or a plastic phone?

Plastic phones are much cheaper than metal or wooden or but because buying a phone, or in this case; an instrument is an investment.

You would rather do a little expensive but long-lasting instrument than a cheap and easily breakable instrument.

There is a massive difference in the way the sound is produced with instruments made using different materials.

There was a study conducted by a bunch of scientists who made musical instruments with different materials.

Not only did a wooden instrument sound different from a plastic instrument, but different instruments made with different types of metals like copper or brass also sounded different.

Each material has its own vibration which causes this difference.

You can be the judge of the quality of sound. To me, plastic materials can’t sound as good as metal or wooden instruments.

If you’ve ever seen a plastic trombone or even a trumpet, you will hear the difference.

I think it’s pretty clear why plastic is such a poor choice, especially to get an instrument.

In an article written by the woman who helped the turtle with a straw stuck in its nose, she mentions the reason why it’s so hard to spread awareness about such big issues.

The thing is, the issue is so much bigger than us, we think it’s unrealistic and unachievable; if you’re trying to defeat the problem.

Christine Figgener in her article talks about how scientific language is not easily accessible and hard for a person with a non-science background to understand and decode.

It’s important to read about such information. That’s why science has made it easy to understand some concepts that are essential to work with the environment.

Things like gruesome and daunting videos and images might have a deeper and faster impact (like the turtle video did) but the point is to not just talk about it but to shift it into the realm of action.

Until you decide to take care of the environment, by taking steps and practicing it, there’s not a lot that will happen just by reading about it.

So take care of the planet you live in, folks.

This may come off as a very preachy blog but it’s cool to care. Care about the things that don’t just impact your lives but impact everybody else.

There’s so much to do in so little time. We have about 12 years from now before things get worse and even to a point; where it can’t be fixed.

Don’t kill your love for music,

Don’t kill the planet either.