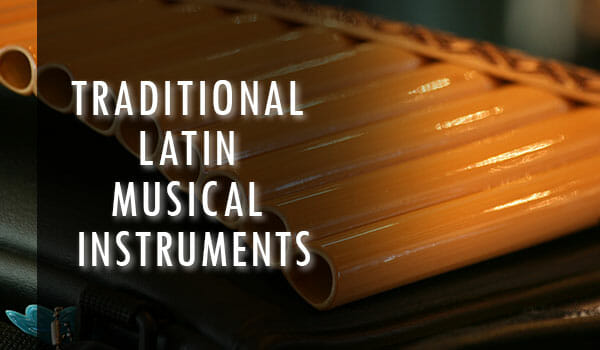 Latin America is an entity with its special forms of arts and culture. The amalgamation of the music of Americans, Europeans (European traders who settled in Latin America) and Africans (in the 16th century, African slaves were captured by the Americans) is observed in Latin music. 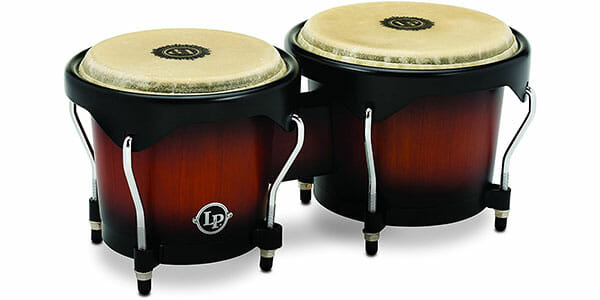 The bongo drums shortly called bongos are a percussion instrument with a pair of unequal drums.

The larger drum and the smaller drum were named hembra and macho in order. A right-handed player shall play the hembra with his right hand and vice versa.

Each drum in the pair has an open bottom (that means, only one playing surface per drum). The drums are small, and easy to carry.

While performing, they are put on a stand. They are normally played by hands and repetition occurs in their music. The surface of the drumhead is rubbed to adjust pitch.

Bongo players are known as bongoseros.

It is believed that the bongos have an Afro-Cuban background. To be clearer, they were one of the first African instruments to be adopted into the Cuban community, from where more changes were made.

The beginner version of the bongos was larger than the current one, and the pitch was lower. Bongos used today are more high-pitched than many other Latin percussion instruments.

The marímbula is a lamellophone and is also known as the marimba in regions such as the Dominican Republic but it should not be confused with the percussion instrument marimba (about which, you’ll know soon in this article).

A lamellophone is simply a plucked idiophone with a free end.

The marímbula is made of wood with metal strips attached to its sound-hole. African slaves built their musical instruments with whatever material they could have access to.

Each metal strip is tuned to a certain pitch and they are plucked to produce the bass needed. The marímbula may also be used for playing basic treble notes but it remained to be commonly used for bass.

Remember that there is no specific way of constructing a marímbula as the size of the instrument, the tuning, and body material vary according to one’s preferences.

The player sits on the marímbula and bends to pluck the keys (metal strips) and hits the sides of the instrument for extra beats. This method of playing is widely observed but different methods are practiced in some regions.

Americans obtained this from their African slaves and introduced it to Jamaica, where the marímbula still holds its fame. 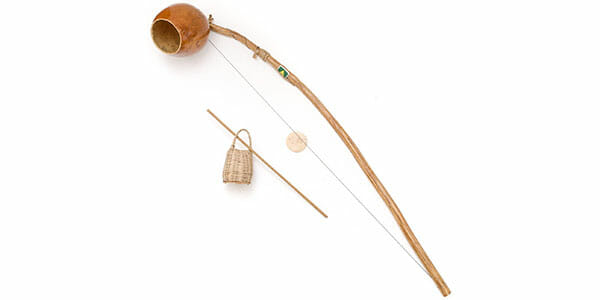 The berimbau is a percussion instrument with its origin in Africa and has become popular with the Brazilians.

Capoeira is a martial art from Brazil with a blend of acrobatics, dance, and music. This berimbau played a significant role in capoeira’s music (until then, drums had been the heart of capoeira’s music).

This percussion instrument has only one string and can be called a musical bow. The bow is made of wood and the string is of metal. The resonator lies on one end of the bow. The berimbau is played with a coin or with a stick.

Berimbaus are classified into three groups based on the instrument’s tonal range. It is interesting to know that a berimbau of the highest tone is called a viola (not our regular viola).

The musical instrument allows the player to touch different pitches and to tune it according to his choice although it is microtonal. There are no mandatory rules for tuning the berimbau.

Fun fact: The berimbau is often accompanied by another percussion instrument caxixi that looks like a basket. 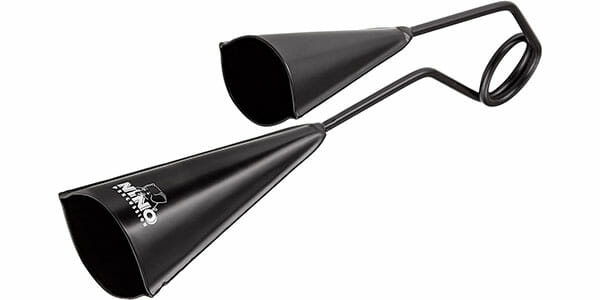 The agogo is an idiophone and the instrument is a bell or a pair of bells. It was first used in West Africa and later brought to Brazil in Latin America. It is still a part of the Brazilian drum kit and its pitch is higher than any other instrument of the kit.

In the olden days, agogô was just a single iron bell but the modern version comes as a pair of unequal bells.

These bells are held together by a U-shaped thin metal rod. Various types of metals are used in making the body and with the metal, the sound changes.

While playing the agogo, the player holds it by making sure the smaller bell is on the top. The bells are stuck with a stick and sometimes clicked together. Their sound is moderately loud, bright and cheery.

The notation of agogô music follows the same pattern as the bell music. This explains why modern musicians use agogô now and then.

Fun fact: The agogo is a small bell instrument but there is a smaller version of it known as gan gan. 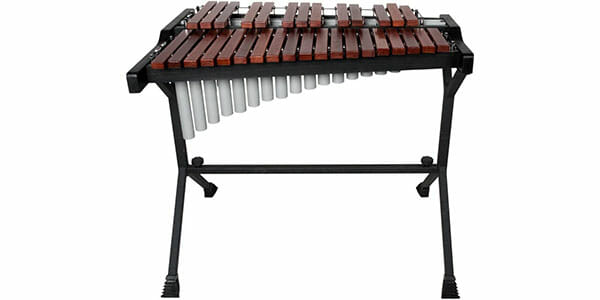 The marimba is a percussion instrument and an idiophone with its bars arranged like a piano’s keys. The marimba is closely associated with the xylophone and with several African lamellophones.

Usually, a marimba has more than 4 octaves. The lower note has the biggest sized bar of all. There is no octave displacement in the marimba. The loud and rich sound of the marimba is due to the presence of resonators beneath each bar that amplifies the output.

A marimba player also called a marimbist strikes the bars with mallets and the number of mallets can extend up to eight. Several grip techniques are used by the marimbists to bring it into action. 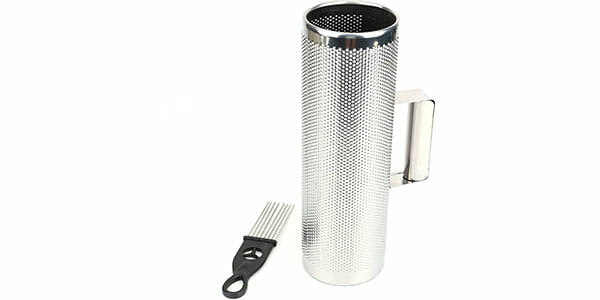 The guira is a percussion instrument that looks like a kitchen grater. This is an idiophone made of metal (commonly steel).

The güira is from the Dominican Republic and is similar to the Cuban güiro, except for the metallic tone (güiro’s tone is wooden). Mark that both of them are Latin musical instruments.

The güira is known to have replaced the music instruments of other regions in Latin America. It is one of the primary instruments used in bachata, a genre of Latin music.

While the traditional güira’s tube has an open-end, the commercial model comes with beads enclosed completely in a tube (implying the tube is closed) with tapered ends. The beads let the player use the instrument like a shaker.

You don’t find many using the güiro as a shaker, though. It is used only to produce rhythm and to alter the tempo of the music.

This instrument is played with a scraper and the range varies with the speed of scraping. Expert players work their way with muting the güiro to produce special effects.

This instrument is not as easy as it looks when it has to be played. 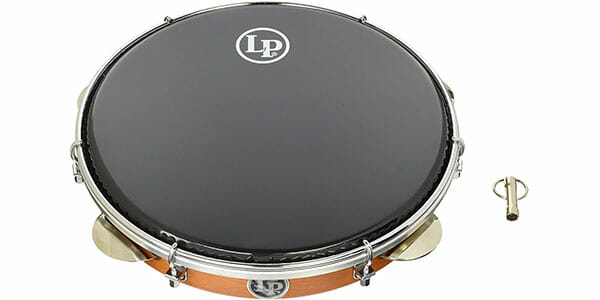 The pandeiro is a percussion instrument that resembles the tambourine in structure. This is a type of frame drum used in a wide range of music styles in Brazil.

A pandeiro has a wooden drum frame with cymbals or jingles set in the circumference of the frame. The cymbals in a pandeiro are known as platinelas. The frame is covered with skin which is the primary playing surface of the instrument. The frame and the skin make the drum head.

The drum head can be tuned by adjusting the keys that hold the skin in place and the number of platinelas is not the same in all models.

While the drum head is struck to play beats, the platinelas can be used to make sound by shaking. Unlike the high pitched sound made by the metal cymbals, the platinelas produce low pitched, deep sound.

The player holds the pandeiro in one hand and strikes it with the dominant hand. The entire hand is used in creating effects like a roll.

Few musicians incorporated the pandeiro into the modern drum kit by tuning it into acting like a bass drum. 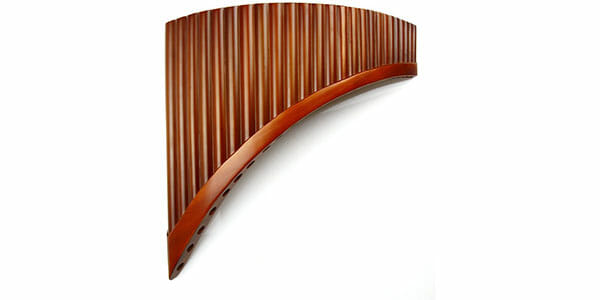 Whatever the regional music we talk about, it is incomplete without mentioning a woodwind instrument. In Latin music, the pan flute was widely used.

The pan flute is also called syrinx in a few regions and varies structurally with each place.

The flute looks like a series of wooden pipes that are closed and are of unequal length. The length gradually increases from one side to the other. Occasionally, the width of the pipes follow the same drill.

The pan flute was originally made of bamboo and reed but now, flutes made with metals are available too.

Each tube of the flute is tuned into a fundamental frequency. A player who is well versed with the instrument’s playing techniques can play all notes in all keys, even harmonics, odd harmonics, sharps, flats, you name it!

The control mechanism of a pan flute includes both hand and vocal coordination which are similar to that of a violin and modern flute respectively.

Pan flutes are popular throughout the world and the traditional model of Latin music is slightly curved making it less strenuous for the player to switch between the tubes. 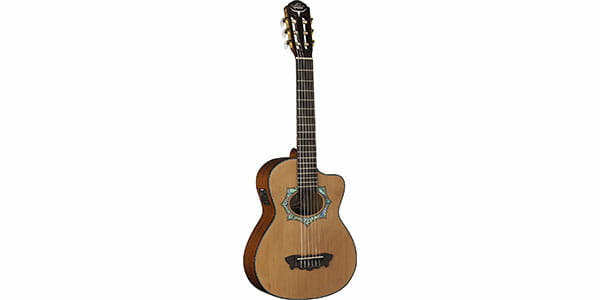 The requinto guitar is a popular type of guitar preferred by the Latin Americans. Before we jump into knowing about it, here is the word ‘requinto’ which you might consider adding to your vocabulary.

Requinto is a Spanish word that indicates a smaller yet high-pitched version of a musical instrument. However, when literally speaking, it means ‘three-fifth of a given quantity’.

Though requinto can mean any instrument, unless said specifically, it is assumed to be a guitar. Therefore, you gotta mention it as ‘requinto flute’ or ‘requinto drums’ and so on.

A requinto guitar is smaller in size than the regular guitar but with the same number (six) of strings. The tuning is different, though. Tuning of a requinto guitar is done four notes above the standard guitar tuning. The fretboard and tuning pegs are similar to that of a classical guitar.

Bachata is a Latin music form that uses the requinto guitar as the lead guitar along with a rhythm guitar (called segundo) and other percussion instruments. The requinto guitar still enjoys popularity in Mexico and Spain. 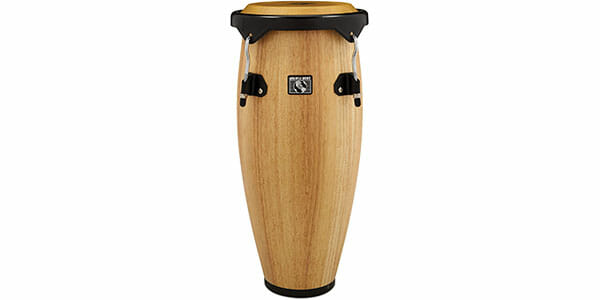 The tumbadora, also known as conga, is a percussion instrument of Afro-Cuban origin. These are used as hand drums and play a huge role in folk music.

The drums are of three types each with a different pitch. They are elongated and allow the player either to sit or stand while playing. The player known as conguero uses his palm to strike the playing surface of the conga. During their initial days, each conguero played one conga and hence each performance needed multiple congueros. In the present day, a conguero plays at least two congas.

In addition to the basic strokes that were in use for ages, modern congueros invented the technique to bend the pitch and is observed in many parts of the world.

The drumhead (playable surface) of the conga is made to get tuned as per one’s choice. Afro-Cubans used to heat the drumhead to tune it while today it is as easy as loosening or tightening the pegs of the drumhead. The conga, when used as a percussion instrument, needs no tuning, though. The tuning has to be checked only when playing it to produce harmony.