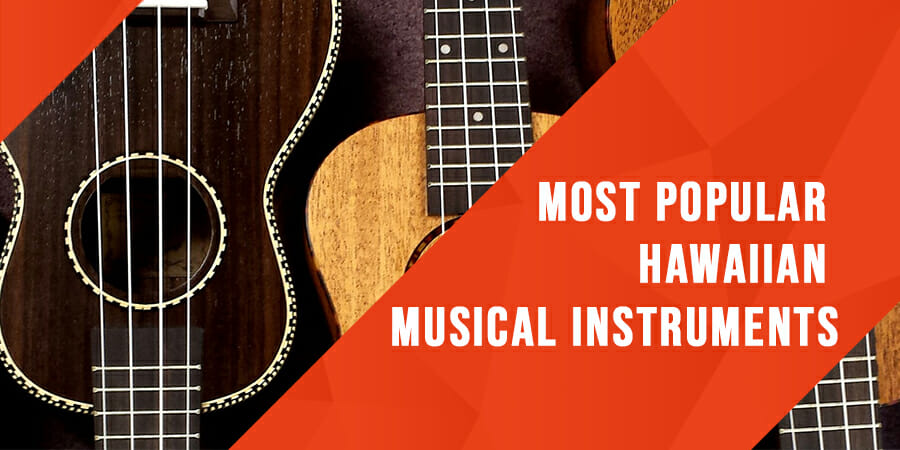 Hawaii is an American state; however, the music of this island state is drastically different from that of the mainland. This is because geographically, Hawaii, is cut off from the mainland US and the original inhabitants are ethnically and culturally distinct from that of mainland US.

Hawaiian culture is more similar to Polynesian regions than to continental America. You can see it in their clothing, their language and most importantly their music. The music instruments that they use have Polynesian roots but are unique in their own right.

In this article, we’ll show you the most popular Hawaiian musical instruments. You might be familiar with some of them, while there are some that you will not have seen or heard of before.

The Ukelele is the most popular Hawaiian musical instrument across the globe. Numerous modern artists use it and despite that, most people don’t know that it has Hawaiian origins. It is a stringed instrument which looks like a small guitar.

Its small size and uncanny resemblance to the guitar is the reason for its widespread popularity. The millennial generation, in particular, has a massive fan base of this instrument and Youtube is crowded with Ukelele covers of popular songs.

The Ukelele owes its existence to Portuguese immigrants who introduced the Machete to Hawaii in the 19th century. The local population quite liked the machete and developed their own version of it, which eventually transformed into the Ukelele that we have today.

The word Ukelele means “jumping flea” in English, and no one knows why is that the case. The reason for its initial success was due to the patronage it received from the King Kalakaua. Soon, it became known to the people of the mainland US, and from there it found a platform to spread to the rest of the world.

Ka’eke’ eke is one of the most basic and most unique instruments that you will ever come across. It is from the idiophone class of instruments and has its origins in some parts of Oceania from where it found its way to Hawaii. In essence, it is merely a bamboo tube or pipe which is then stomped vertically on the ground or a kuolokani mat (ancient timbrel drum) to produce a sound.

Most players use a couple of bamboo tubes, one in each hand and stomp it on the ground in a rhythmic motion. The length and diameter of the tube are the factors that determine the quality of the tone.

Ka’eke’ eke is an integral part of the hula dance, which is an ethnic Polynesian dance form, and many other traditional chants. Many times hula dancers play the Ka’eke’ eke while dancing while other musicians play it in a kneeling posture.

Ipu another traditional idiophone that is unlike any other instrument in the world. Like the Ka’eke’ eke, it is also used in hula dancing rituals and is an integral part of traditional Hawaiian culture.

Ipu is made from dried and hollowed-out gourds which are then polished with sand or sandpaper. There are two varieties; namely, the double gourd version called the Ipu heke and single gourd variety called the Ipu heke ‘ole. Besides hula, both versions of Ipu are used in several traditional chants known as mele.

Ipu players use a variety of techniques to produce different tones. The player often kneels down and stomps it on the ground to create a base tone, while a crisper tone is produced by slapping the larger gourd with an open palm or with individual fingers.

According to many historians, Ipu is a brainchild of ancient Hawaiian people. This is because no other part of Polynesia or Oceania uses stamping vessels for music.

Pahu is a Polynesian instrument that is quite popular in Hawaii and many other island cultures including Samoa, Tahiti and Cook Islands. It is a large drum which is carved out from a single log and the playing side is covered with a stretched shark skin which is played by hand. Pahu is considered sacred by many of these cultures and is usually placed in temples known as heiau, where it is used in ritual ceremonies.

In Hawaii, Pahu is also used in hula dances and is the most vital percussion instrument to them. The coconut tree is the most commonly used to make the Pahu. They use hollow the trunk of the tree and carve beautiful patterns on the base to make it more appealing. Sometimes, Hawaiian Pahu also features Ray skin for covering the playing side instead of the regular shark skin.

The ohe hano ihu is one of the oldest musical instruments of Hawaiian culture. It is a nose flute and has been a part of Hawaiian folklore for quite some time. There are several mythical stories attached to the ohe hano ihu, many of which are forms of romantic poetry. The instrument is quite rare these days, and the number of skilled ohe hano ihu players is dwindling.

It is made from a bamboo stick which has holes bored into it. One of these holes is the blowhole, and the others are finger holes which are placed at a fixed distance from one another. The length of a traditional ohe hano ihu is about 11.5 inches. The ohe player blows air into the blowhole from his right nostril while blocking the left nostril with the left hand. The fingers from the right hand are used to cover the finger- holes.

Nose flutes are a part of multiple Polynesian cultures and researchers believed it was brought to Hawaii centuries ago.

The Ukeke is a Hawaiian musical bow, which is the most basic stringed instrument. It is made from koa wood and is usually 1.5 to 2 feet long and 1.5 inches wide. It has 2 or 3 strings which are made from steel; however, the older Ukekes had coconut fibre strings.

The player uses one of the hands to strum the strings while the other hand holds the ukeke in place. Often, they also use their mouth as a resonating chamber.

The ukeke is the only stringed instrument that is native to Hawaii as European migrants brought all of the others.

‘Uli’uli is an assortment of gourd rattles which are covered in vibrant coloured feathers. It is an idiophone which is commonly used in mele chants and is part of many hula dances, most notably the ‘Auana and Kahiko versions. ‘Uli’uli is also a traditional Hawaiian instrument whose prevalence is slowly declining. These days it is mostly used by the hālau hula, which are conventional dance schools.

‘Uli’uli produces some of the most distinct sounds. The players who also perform the dance while playing hold the single ‘Uli’uli in their right hand and shake it or strike it on their palms. This produces a sizzling sound and each strike or shake is performed in a rhythm which is aligned with the chanting.

There is no evidence of similar instruments in other Polynesian regions, which suggests that ‘Uli’uli was crafted in Hawaii itself.

Xaphoon, which is quite similar to a flute, is a Hawaiian single reed wind instrument. It is a relatively modern and new instrument when compare with others in the list, as the first Xaphoon was made in 1972. It was made from bamboo by a Hawaiian multi-instrumentalist called Brian Whitman.

Whitman was experimenting with a bamboo flute and in a spontaneous effort created the first Xaphoon. He was pleased with the sound and the response he got from fellow musicians, so he patented the instrument.

Although it is an improvised version of the bamboo flute, the sound of Xaphoon is more similar to a saxophone than a flute. Soon it became quite popular in the rest of the world, and many jazz artists used it from time to time.

Pû is a Hawaiian aerophone and very similar to the conch which is used in the rest of the world. It is made from a helmet shell and was used as a signalling instrument by indigenous Hawaiian people before the American migration.

It has several myths surrounding it and has a religious significance in Hawaiian culture. Pû is still used today to announce crucial events such as convening the Hawaiian legislature. Conch shells and similar instruments are widespread in other Polynesian cultures which suggests that it was brought to Hawaii centuries ago.

‘Ili’ili is one of the simplest instruments in the world. It is concussion idiophone which essentially are four oval-shaped lava stones of preferably the pāhoehoe variety. These types of stones are incredibly smooth and are naturally crafted by flowing water in a shape that fits perfectly in the hand. Few craftsmen alter the shape natural stones to make them more suitable for musical purposes.

‘Ili’ili is also one of the instruments used in hula dances. Although, the instrument is quite simplistic, playing it, however, requires a particular skill. ‘Ili’ili players use a sophisticated technique where they hold two stones in each hand and strike them in such a manner which produces a distinct dry sound.

Historians believe that ‘ili’ili is indigenous to Hawaii as no similar instruments have been discovered in other Polynesian islands.