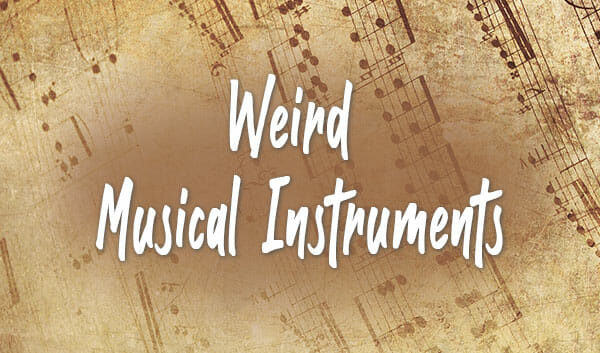 Horror is a favorite genre of many people. Ever wondered why we love to be scared? Doesn’t it seem weird? Fear releases a hormone called dopamine which causes excitement and pleasure to the body.

One thing that sets apart a horror film is the background score and the eerie effects to set the suspense. Many horror films are remembered forever because of the goosebumps they gave when watched.

Regular musical instruments like a piano are not enough to produce such haunting soundtracks. This very need provoked the invention of several instruments to cater the production of horror music.

And few of them stood out ‘because of their uniqueness (or weirdness, if we might say)’. Take a look at some of the weird musical instruments that are used to produce horror sounds for movies. 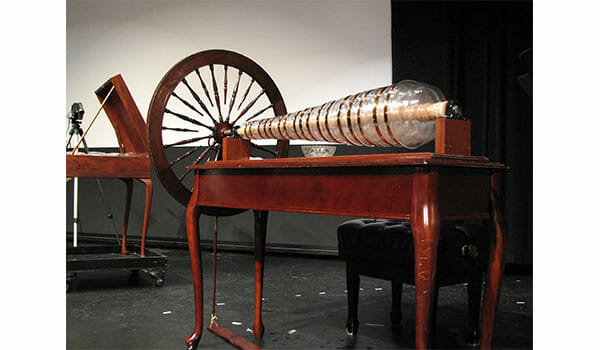 This instrument is hella expensive and you better have serious commitment to play it, in case you are thinking of buying it. It takes a lot of expertise to manufacture one of these.

Known with other names like bowl organ and glass armonica (in Italian, armonica means harmony), glass harmonica was invented by Benjamin Franklin who holds the credits for inventing several other instruments. He originally named it glass armonica.

Structure of the instrument can be described as rotating glass disks arranged on a shaft. And just like a regular harmonica, the notes go low to high from left to right.

If you’re wondering whether glass disks are capable of making sounds that are creepy-enough, read on.

Benjamin Franklin originally made and liked this instrument for needing no re-tuning and for the super soft melodies it could make. However, things changed with time.

Post 18th century, the deep and dark sounds made by glass harmonica were believed to drive listeners and players mad and crazy. In fact, it did happen.

People who were already sad and depressed were strictly advised to stay away from this instrument lest they get lost in the gloomy abyss.

These attributes made this instrument a favorite for music producers working in the horror genre.

A product from Morfbeats, Mega Marvin is truly mega in the modulations that can be achieved with this heavy looking instrument.

This is a handcrafted instrument that produces organic horror sounds.

Along with the melancholy sounds it produces, the looks are equally dark. Judging the book by its cover will not go wrong here. It looks somewhat like small to large springs and strings assembled on a thick triangular surface. Looks darker than the simple description.

Morfbeats also have micro and mini versions in Marvin but horror movies usually opt for the mega version.

Mega Marvin is an exclusive instrument to make scary music and cannot be used to make any other genre of music. Other melodies? Nah! If you’re curious, you can try it out only to give up finally. Want to play this for your guests? Be prepared for all the weird looks you would get in return.

Another loved feature of this instrument is its output volume. Amplifier is hardly needed as the acoustics are more than satisfactory. Too loud to believe that it is totally acoustic.

The strings are usually played with a bow and bell mallets are used to play at other points. Few sounds are made directly by the hand too.

Mega Marvin’s sounds resemble that of a violin, synth and organ at some places but if tried on any of those other instruments, it is nearly impossible to achieve the same output.

An ‘engine’ that makes horror movies run successfully in the theaters by giving out that eerie music needed.

Created by Mark Korven, whose music in The Witch, The Lighthouse (and many such horror media) sent chills, the apprehension engine is custom made and exclusively serves the purpose of making scary music.

Now we know how Mark Korven manages to creep us out with his creation, everytime!!

On a side note, if you are a horror movie lover and haven’t watched The Witch, watch it now. After all, it scared the hell even out of the author of The Shining. ‘Nuff hints dropped!

According to its inventor Korven, the apprehension engine began with his seeking for a more experimental and unique instrument that does not produce routine sounds.

To quest this, Korven teamed up with Tony Duggan Smith. And sure, we love the result.

Brian Eno, one of the most influential figures (because of his contemporary recording techniques) in the music industry called the apprehension engine as “the most terrifying musical instrument of all time“. That says it all. 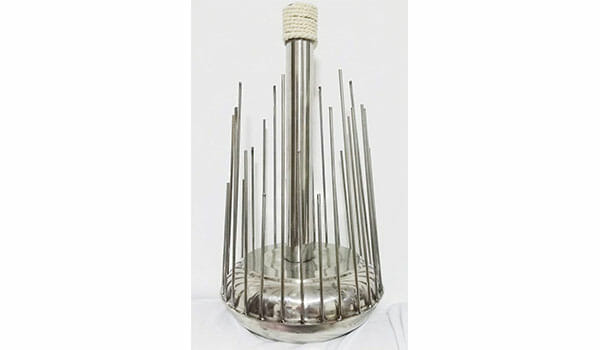 Don’t lie that you weren’t scared by the Poltergeist’s background music. That eeriness was made possible by the waterphone.

AquaSonic waterphone is a popular choice among music composers when working for horror movies. It resembles Tibetan water drum in certain aspects.

This was invented by Robert Waters somewhere in the 1960s (Yeah, the musical instrument was named after its creator). Since then, there was no looking back in making hauntingly ethereal music.

Waterphone looks like steel tonal rods of different lengths arranged on the circumference of a circular base with a diaphragm in the center. The diaphragm has an aperture to fill water through. Water level affects the tone of the instrument. Higher the water level, deeper the sound.

Waterphone can be played with a bow or with mallets and even with damp fingers.

Bonus fact: Waterphone can also be used underwater for communication with other aquatic species like whales. 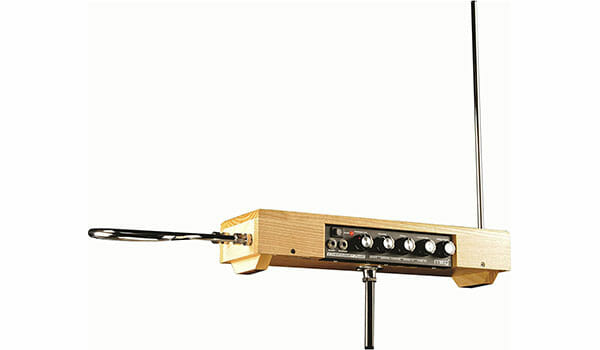 Invented by Leon Theremin, this instrument too was named after its inventor. The background story is interesting as Leon never intended to make a musical instrument but a sonar device to detect objects entering into its zone. Instead, theremin came out which obviously is not a disappointment.

One of the unique features of this instrument is that the player does not touch the instrument while playing. But there’s a catch. The player has to put effort in playing the notes as well as the rests unlike in other instruments, where not touching is enough to play the rest.

Theremin is an electronic musical instrument with two metal antennae that give output based on the position of the hands and the distance from the instrument. One antenna is associated to pitch and the other to volume. The signals are electric and amplifier is a must, which eventually sends the signals to a connected speaker.

Movies like Spellbound and The Lost Weekend had their eerie music made from the theremin. Theremin is mandatory for sci-fi movies’ soundtracks.

These days, there are many theremin players and its sounds were remade by sopranos. Theremins are available from student to professional models in different price ranges.

Fun fact: Theremin is one of the earliest electronic musical instruments ever known. 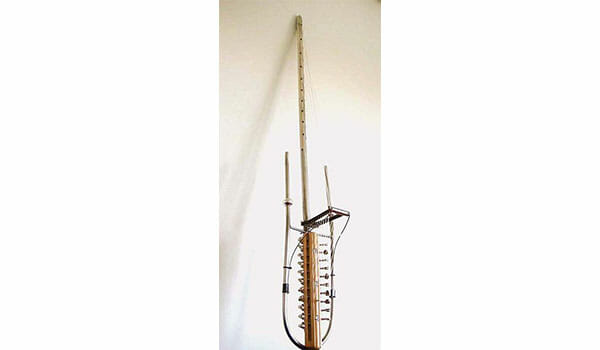 In simple words, gravikord is an electric double-bridge harp. It has 24 nylon strings arranged in two sets of 12 each. Each set is arranged symmetrically on each side of the central steel frame. The strings have no skin or guard.

It was invented by Robert Grawi, who is also the inventor of gravi-kora. Gravi-kora is similar to gravikord not just in name but also in few other aspects.

Back to gravikord, it is helpful in making complex rhythms which are usual part of eerie music. Cross rhythms can be played with simple techniques in the movement of the thumb and index finger of the player. Though the playing techniques are simple, they require a lot of control to achieve the perfect dreadful sound.

Gravikords are a favorite in producing music associated with suspense and jump scare.

Gravikords of early days were acoustic. However, the modern version needs to be accompanied by an amplifier.

Gravikords are not exclusive creepy sound makers but can be used in making rhythms of other genres too. 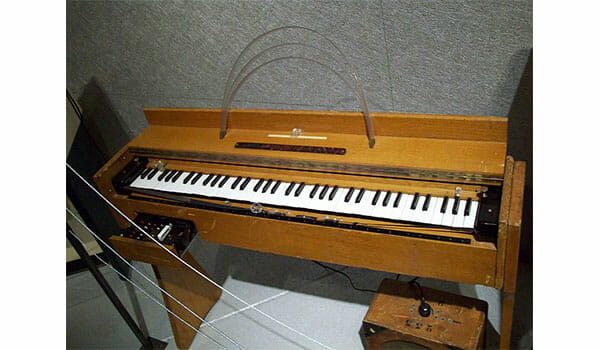 This weird-named instrument is not forgotten in the list. The player of this instrument is called an ondist, thankfully not a mouthful word.

It is also called ondes musicales which means musical waves in French. The inventor of this musical instrument was a cellist named Maurice Martenot. He wanted to incorporate the expressiveness of a cello into his invention which resulted in the ondes musicales that gives theremin-like sounds. His invention is now considered as a mix of organ and theremin.

The method of playing and controlling this instrument is unique. It is controlled by a ring worn on the index finger of the player’s right hand or with a keyboard. Ring sliding across the wire produces sounds. The drawer allows left-hand controls.

Ondes musicales produces both smooth melodies as well as sounds that give goosebumps.

A French composer named Olivier Messiaen used the ondes musicales for many of his compositions and cited the instrument as his favorite.

Ondes martenot was used in movies like There Will be Blood, The Red House and Spellbound.

The next time you hear any haunting music, you’d keep guessing what weird instrument is behind it.