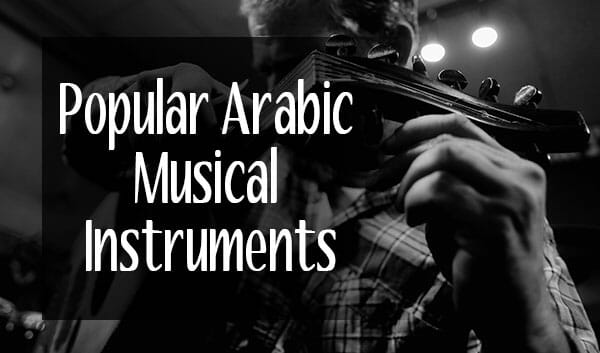 Arabic music is not limited to just classical but has many other genres like pop and folk.

You might have heard Arabic instrumental music at some point of your life but haven’t known what the instruments are or what style the music is made in.

You can check out these 10 Arabic musical instruments which sound pretty beautiful when played. 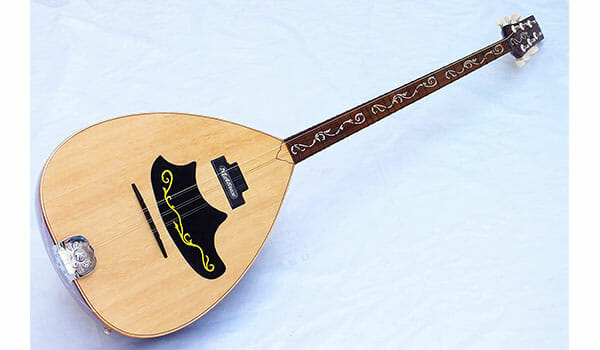 If the name Buzuq reminds you of bouzouki, you are not wrong. Buzuq and bouzouki are similar instruments even though the latter is from Greece.

Buzuq is a member of the lute-family and is used to produce relatively deeper tones.

The structure is suitable to play at intervals shorter than a semitone as the buzuq has a longer fretted neck with a small body. It means, those intervals which are practically impossible to be played in the Western system & associated musical instruments, can be played on the buzuq without breaking a sweat.

Lebanese musicians, the Rahbanis (also known as Rahbani brothers) brought this instrument into limelight by using it extensively. Until then, buzuq was merely a solo folk instrument.

Once it emerged as a popular instrument, there was no looking back and it became a common instrument with the other Arabic musical instruments in concerts and for studio uses.

Mijwiz is a traditional musical instrument and can be played as a single instrument or as an accompaniment in belly dances and folk celebrations. Recordings of folk songs usually feature the mijwiz.

Playing the mijwiz requires the player to know the technique of circular breathing which gives no break in playing the music. The player stores air in his cheeks and inhales through the nose, without pausing to catch his breath. It is as hard as it sounds and may take a lot of time to get comfortable.

In Arabic, qanun means law which makes sense as it is the maker of pitch laws and rules for others in the ensemble.

Qanun is closely related to the zither with size being the main difference. Qanun has a large trapezoid soundboard to which 81 strings are attached. The shape of the soundboard varies slightly in different models.

With harp as its ancestor, qanun is a string instrument that can be placed on the player’s lap or on a table while playing. The strings are plucked with two plectrums, one in each hand.

Each course of strings feature a mandal similar to the tuning keys of a guitar and allows the player to move towards a different pitch while playing.

The openings on the body of the qanun are called kafes which are credited for the sensational sound quality of the musical instrument. The number and location of the kafes can be customized according to personal taste.

Qanun is mostly used in association with other instruments but sounds equally good as a solo instrument too. 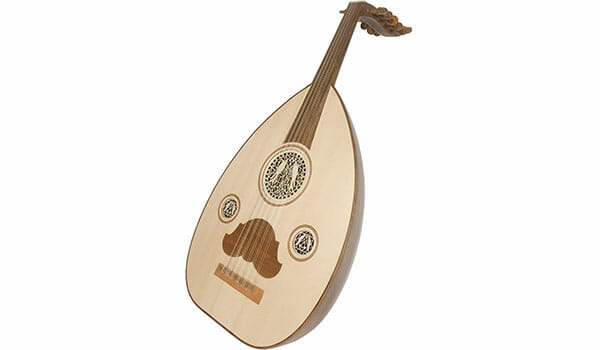 Structurally, oud is comparable with  the buzuq as both of them belong to the lute-family. But oud is more popular.

Oud has a large pear-shaped body with a short, unfretted neck. Its structure is ideal to produce accurate pitch from a stringed instrument. The instrument has a large tonal range of up to 3 octaves which is quite impressive.

There are usually 6 courses of strings attached to the neck and they are plucked with the plectrum called risha which is lean and longer compared to the regular plectrum. Risha can be shortly described as ‘oud plectrum‘.

There is another variant called zenne oud which is smaller and designed with the idea of making it compatible for those with smaller hands and fingers.

Oud is very similar to the modern lutes and this makes it an ideal companion for songwriters.

In our regular words, sagat is also called a zill. Yeah, those little finger cymbals!

On a side note, several pairs of zills combined with a drum frame make the tambourine.

In Arabic ensemble, Sagat was used primarily by belly dancers and in other dance performances. Sagat set adds grace to their performance as the dancers use it with certain finger cymbal techniques.

Cymbals in a drum kit are of larger size and made of bronze but sagat is made of brass, light in weight and its diameter does not exceed 2 inches.

A sagat set consists of four zills, two for each hand, for the thumb and long finger to be particular. They are attached to the fingers with the help of ties or elastic bands. In the olden days, leather strips were used for the same.

Though the instrument looks like a miniature version, many styles and rhythms can be produced with it. 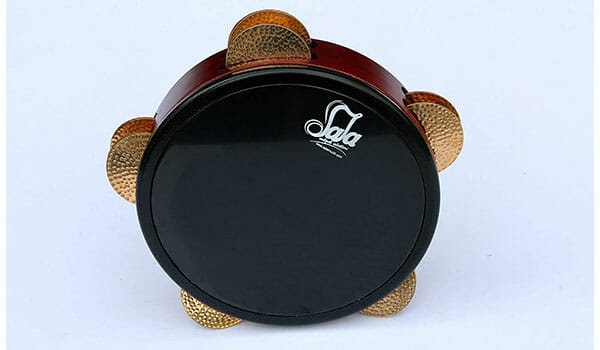 Just now we had a mention of tambourine while talking about sagat.

Well, riqq is a type of small tambourine used in Arabic folk music. It is not confined to basic rhythms but has utmost importance in folk performances. In a takht, riqq is the only percussion instrument and its player is the cause for the rhythm for the whole ensemble.

The riqq consists of a drum frame adorned with 5 pairs of zills, a pair in each slit. Over the years, riqq evolved to be light in weight which is essential as it is played by holding at different positions from the body (holding at the knee level or above the head or sideways).

Playing the riqq demands the player to stand and perform as the movements need activeness and sitting will not help in any way.

Commonly known to us as bagpipes, Tulum is a woodwind instrument which gives continuous play of music because of the bag that stores air. Therefore, even though the player has to blow air into the pipe to make sound, he doesn’t have to try techniques like circular breathing.

Tulum means ‘a skin container‘ which is true as the bag is usually made of animal skin.

Through the years, the structure has been updated to suit modernity but the sound output remained constant.

Along with the bag, Tulum has a blowpipe, two flutes and is a double-reed instrument. The interior of this musical instrument is cleaned by pouring antiseptic liquid every now and then to prevent the instrument from going bad.

Tulum’s sound is low pitched and has its own characteristic style. This makes it a widely used instrument among the current generation as well.

Tulum is played at any kind of an occasion be it a party or a funeral. 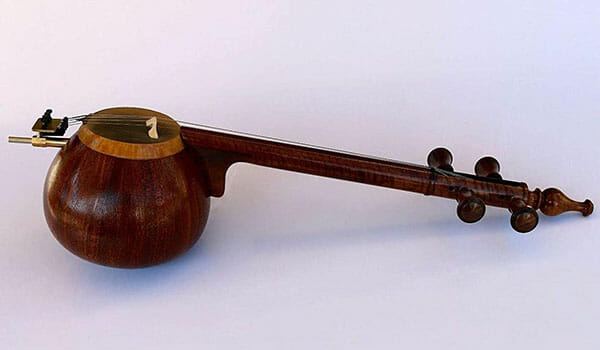 This complex looking string instrument is a traditional Arabic musical instrument whose making and playing is a part of UNESCO’s Intangible Culture Heritage. In English, it is often referred to as spiked fiddle as the spike at the bottom supports the kamancheh in position while being played.

The body is round like a bowl and the neck is long with 4 strings. Older models of kamancheh had only 3 strings. The distinctive tuning pegs can be used to tune just like a violin. Kamanche has the same range as the modern violin but sounds different due to the difference in the respective sound boxes.

Paintings of several Arabic dynasties depict the usage of kamancheh for celebrations and in military scenarios. Based on such historical evidence, kamanche is known as an important instrument of the Arabs in the olden days. 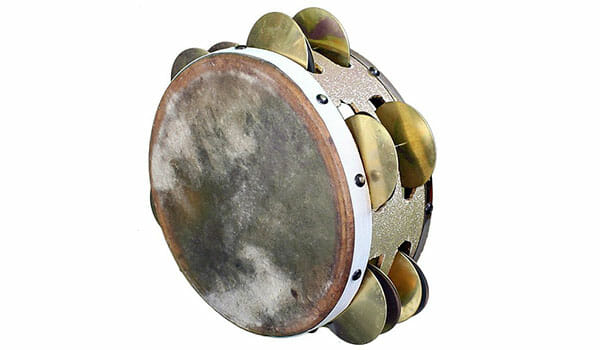 Mazhar is another type of tambourine. As riqq too is a tambourine, mazhar is closely related. Mazhar is considerably heavy and large.

The frame is made of wood and its cymbals/zills are heavy as well and are around 5 inches in diameter, too large compared to those of routine tambourines. Cymbals are usually made of brass and make rhythms based on the direction and speed of shaking.

While a riqq is good enough for a takht, firqa is best accompanied with mazhar for percussion. This musical instrument is used in weddings and other celebrations for the loud pounding sound it makes.

As the instrument’s weight cannot be carried while playing, the player usually sits down and plays it unlike in playing a riqq whose position is constantly changed to change the sound. Techniques in playing too vary from that of a riqq. 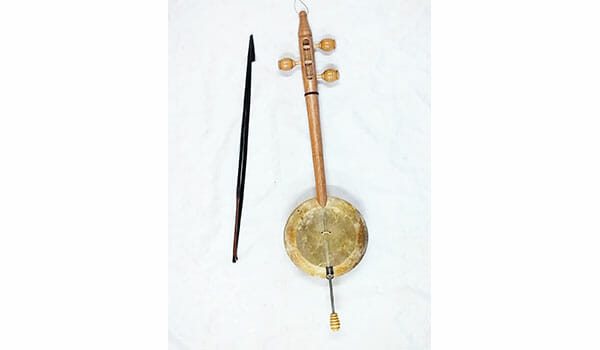 This stringed musical instrument is one of the oldest instruments and the ancestor of kamancheh and lyra. Another European instrument called rebec is actually this very rebab, except for the changed name.

This is also known as spiked fiddle due to the spike that supports the instrument to stay in its position. Yep, just like a kamancheh.

Rebab is played with a bow like a violin. Its bow is more curved when compared to a regular bow, though. Rebab became popular because of its usage in the Arabic music of olden days.

Rebab lags behind the violin due to limited range of only one octave. But rebab’s sound quality is great for simple melodies.

Rebab is also well-known for its usage in music therapy where patients are healed with its music.

Now you know how the richness of Arab music was and is achieved.