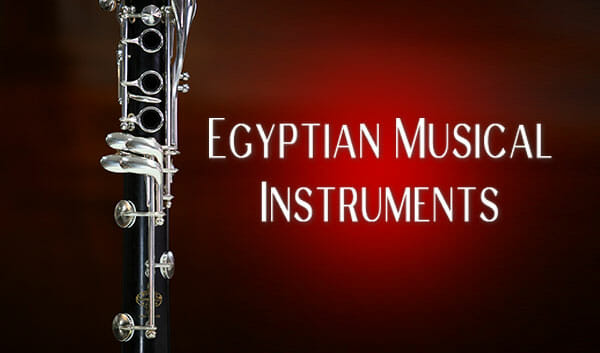 When we talk about Egypt, pyramids are probably the first thing to cross your mind. How Egyptians built those huge pyramids is not fully known yet.

But what we don’t want you to miss is the rich culture that Egypt has. It wasn’t completely unveiled either.

The paintings and hieroglyphics tell us a lot about the vastness of Ancient Egyptian culture viz., tools they used, music instruments they played and the gods they worshiped.

Coming to music, ancient Egyptians were lovers of music and the rulers encouraged musical skills by appointing those with a musical flair in good positions of the government.

Few of the instruments we use today originated in the land of ancient Egypt.

Read on to find out more about Egyptian musical instruments. 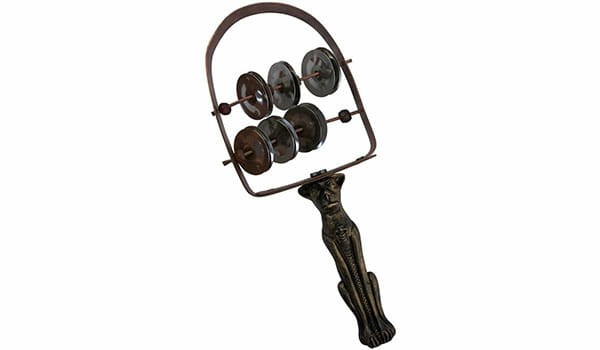 For ancient Egyptians, goddess Hathor’s celebrations in the temple were incomplete without a sistrum.

They didn’t call it a sistrum, though. Shesheset was its name.

Playing a sistrum seems like holding a whisker upside down and shaking it. But it is actually much more graceful than that.

In the olden days, sistrum was considered holy, thanks to its frame’s U-shaped handle that resembles the face of the goddess Hathor. Adding to it is, Isis holding a pail in one hand and a sistrum in the other. Moreover, the sistrum’s shape is closely associated with ankh, Egyptian symbol of life.

The instrument was so sacred and expensive that only high class women possessed it.

In modern terms, sistrum (or rattle) falls under the category of percussion instruments. 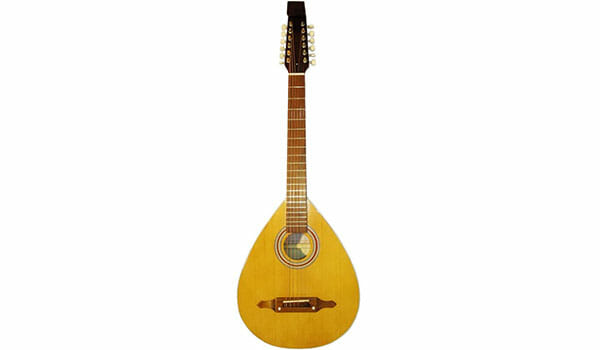 In simpler terms, this is a stringed instrument (like ukulele) and was so popular in ancient Egypt that now there is an entire lute-family consisting of instruments such as mandolin, pipa, guitar and so on.

The neck was either fretted or non-fretted and the body was an elongated ellipse (sometimes, round too). Frets were made visible by using leather to mark on the wooden neck. The neck was attached to the body of the lute.

The structure got updated as days passed by and now we have almond shaped bodies for lutes and the lute’s neck resembles a guitar’s fretboard and runs parallel to the body.

Back in the day, the body was made of whole-shell or wood, tortoise shell, to be precise and the instrument looked like an oar.

Ancient Egyptians preferred lute for its deep and low-pitched string sound due to resonance. 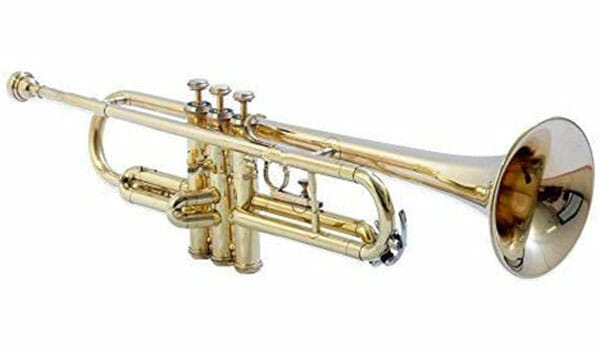 Egyptians in the ancient days did have brass instruments in their collection.

Trumpet’s origin and its usage in ancient Egypt was evident through the discovery of a pair of trumpets in Pharaoh Tutankhamun’s tomb (shortly known as King Tut’s tomb). They are one of the oldest instruments that have been played in Ancient Egypt.

Trumpets were usually used in parades, war times and sometimes in hunting too. Military usage was the primary purpose, though. Trumpets were mostly played by men.

In those days, men played certain instruments for military reasons and women played a few for celebrations and as offerings to gods and goddesses.

Though trumpets in the earlier times were made of wood, Egyptians gradually started making metal trumpets that were better and durable.

Unlike the modern trumpets, the ancient Egyptian trumpet was a long pipe (lead pipe) with a bell. Slides and triggers were absent.

This percussion instrument’s modern structure has a frame with zils (also called jingles).

But its ancient structure was different.

In the very beginning, just the drum frame without any zils was known as ‘tambourine‘.

The number of zils is now as high as 20 in some orchestral tambourines.

Tambourine wasn’t confined to the circular shape alone. Several creative shapes were available but circular shapes happened to be a popular choice owing to the comfort while playing.

Dancing women in Egyptian temples used tambourine frequently to compliment their dancing and singing. Music and dance were often combined and performed together, which leave us a hint of how talented they might have been.

Pharaohs, the rulers of Egypt were admirers of arts and many archaeological findings of this country stand true to it.

In fact, women tambourine players were a majority compared to men. 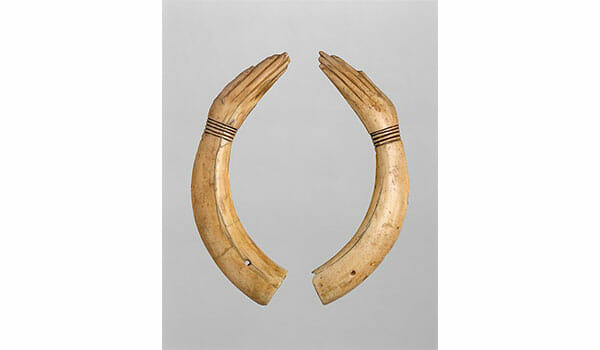 There’s a reason why it says clappers and not clapper. They are a pair that serve as a musical instrument.

Modern clappers have two wooden boards that produce sound together.

But that wasn’t how ancient clappers were designed. They resembled a pair of hands from the elbow to the palm, which seem a little scary for people of present times.

Clappers are one of the oldest percussion instruments used in Egypt for musical celebrations. Without clappers, no occasion took place in ancient Egypt.

Clappers did exactly what their name said. They were used to make clapping sounds which the ancient Egyptians supposedly believed as the depiction of goddess Hathor’s powers that ward off evil powers.

This also explains why few clappers had goddess Hathor’s face on them.

On a side note, Goddess Hathor and God Bes were considered as the gods of music.

Clappers were used in chanting and while playing religious music. They did not limit their music to chanting or vocals but had musical instruments to accompany their rituals. We often clap hands on such occasions and that’s what the ancient Egyptians did in style with clappers.

Another well-known musical instrument, mizmar has its origin from Egypt too, only with varying names around the world.

This woodwind instrument is quite popular even in the present day.

In ancient Egypt, mizmar was double piped and literally had two pipes without any additional decorations.

Usually made of reed stalks, mizmars of both long and short length were played by ancient Egyptians.

Mizmar required an exclusive breathing technique to play. Most of the musicians in the ancient Egyptian empire were proficient and a ‘moderately skilled player’ was non-existent.

The length of the mizmar is inversely proportional to the sharpness of the sound produced. Shorter the length, sharper the sound. Often, more than 3 players played together and their group too was called ‘mizmar’.

Mizmars were mandatory for weddings and dances and their sound closely resembled that of a trumpet.

Clarinet too is a woodwind instrument which is a single tube with a hole at the top into which air is blown to produce music.

Ancient clarinet was made of cane and had a single reed. The presence of this single reed is what makes sure that ancient Egyptian clarinet is indeed a clarinet.

The structure is not at all close to modern clarinets and one would not recognize what it is at first glance.

Ancient Egyptian clarinet looks like two pipes of different lengths tied up together. 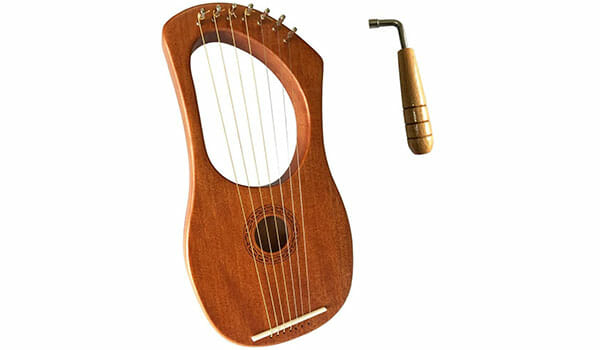 Though this stringed instrument, reminds of a harp, as you know more about a lyre, you would understand that there are clear differences between them both.

Lyre is not too heavy and hence the player holds its weight while playing. A harp is played while it rests partially on the ground. Holding the entire weight of the harp while playing? Who are we kidding?

And unlike a harp, lyre is not plucked by hand but by a plectrum, like a guitar.

Though the looks resemble a harp, the build resembles a guitar as the strings are built in such a way that the vibrations are transmitted to the body of the instrument.

Ancient Egyptians used lyre as a single instrument and also as an accompaniment for poetry reading.

Now, lyres are played in some countries in the name of bowed harps, ’cause it seems like playing a harp with a bow. Simple!

A little tip, lyres are easy to learn and difficult to master.

Ney is a simple woodwind instrument that is active to this very day.

It is considered as one of the oldest instruments played. (So old that the paintings on the walls of the Great Pyramids of Giza show ney players).

Ney is an end-blown flute with around 7 finger holes that control the music produced by the air blown.

Not much has changed in the structure of ancient and modern neys except few external features.

In ancient times, Egyptians used ney to produce sweet sounding melodies and expert players could cover many ranges of music and this simple cane.

Ney has now found favor in Islamic communities and is widely used in their prayers and worship.

Another instrument which hasn’t changed much in its form from the ancient times to now, is cymbal. Get amazed at the choice of ancient Egyptians.

The zils of a tambourine are nothing but miniature cymbals.

Today, Egyptian belly dancers use cymbals in their performances.

Around the world, cymbals are a part of the drum kit.

Isn’t it amazing to know that they used instruments similar to our guitar, oboe, clarinet, flute and even cymbals?

Along with the instruments changing but still having traces of their roots, music too has developed into branches but stays intact with its roots at places. This being said, music is indeed a universal language.